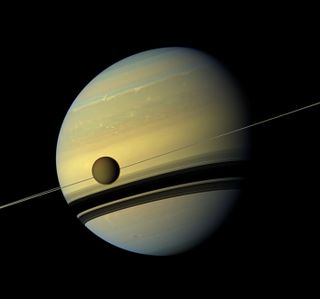 This six-image mosaic from NASA's Cassini spacecraft captures Saturn, its rings and the planet's giant moon Titan. The probe snapped the shots on May 6, 2012, when it was about 483,000 miles from Titan. Image scale is 29 miles per pixel on Titan.
(Image: © NASA/JPL-Caltech/Space Science Institute)

The new natural-color Cassini photos, which were unveiled Wednesday (Aug. 29), capture the Saturn system as it undergoes a seasonal shift. The ringed planet and its many moons look quite different today than they did when Cassini arrived on the scene eight years ago, researchers said.

"As the seasons have advanced, and spring has come to the north and autumn to the south throughout the Saturn system, the azure blue in the northern winter Saturnian hemisphere that greeted Cassini upon its arrival in 2004 is now fading; and it is now the southern hemisphere, in its approach to winter, that is taking on a bluish hue," Cassini imaging team leader Carolyn Porco, of the Space Science Institute in Boulder, Colo., said in a statement.

One of the photos showcases Saturn, its rings and Titan, which at 3,200 miles (5,150 kilometers) wide is larger than the planet Mercury. The edge-on ring system forms a thin line directly behind the huge moon while its shadow projects a series of dark bands onto the planet's southern half.

Another photo shows Titan's south polar vortex — an odd mass of swirling gas that Cassini noticed earlier this year — in clear and dramatic detail. The formation of the vortex is likely related to the seasonal changes occurring on Saturn, Titan and its other moons, scientists have said.

The last photo shows a circle of light around Titan, making the haze-shrouded moon look like a dazzling ring floating in the blackness of space. The effect is created by sunlight scattering through the periphery of Titan's thick, nitrogen-dominated atmosphere, researchers said.

Cassini launched in 1997 and has been studying Saturn and its rings and moons since it arrived in orbit around the planet in 2004. Cassini's primary mission ended in 2008, but the probe's activities have been extended twice, most recently through 2017.