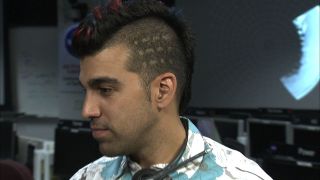 Bobak Ferdowski, a flight controller for NASA's Curiosity Mars rover, recently updated his famous mohawk hairdo to include the Morse Code letters for "JPL" in homage to NASA's Jet Propulsion Laboratory in California, where he works. These Morse Code symbols are also emblazoned on the Curiosity rover's wheels to help researchers track the rover's speed by the indentations it leaves in Martian dirt.
(Image: © NASA)

Ferdowski, a mission controller for the space agency's Curiosity Mars rover, achieved Internet stardom when he sported a Mohawk with blue and red highlights and white stars shaved onto his head during the broadcast of the spacecraft's landing on the Red Planet Aug. 5 (PDT). He has since updated his hair to reflect Curiosity's progressing mission, adding the Morse Code symbols for "JPL" to his 'do, in honor of NASA's Jet Propulsion Laboratory in Pasadena, Calif., where he and other mission controllers direct the rover's work.

Now, the flight director will share his thoughts on life, NASA, and his experiences working on Curiosity during a two-hour broadcast on the web radio site Third Rock Radio at 4 p.m. EDT Thursday.

"Ferdowsi has become an Internet sensation," NASA officials wrote in a statement. "His image has helped popularize the Mars rover mission with young people, and modernized the general public's perception of NASA engineers and scientists."

For his part, the man known as "Mohawk Guy" seems happy to ride his wave of fame and use it to reach out to the public about NASA's work.

"I never thought I'd be hosting a radio show," Ferdowsi said. "Landing a rover on Mars rocks, and so does this music!"

The Morse Code letters Ferdowski recently shaved into his hair match those emblazoned on Curiosity's wheels, which allow scientists to estimate how far the rover travels by noting the marks it leaves behind in the Martian dirt. This system, called visual odometry, was also used on NASA's previous Mars rovers Spirit and Opportunity.

Ferdowsi joined JPL in 2003, with a degree in aerospace engineering from the University of Washington, and a master's degree from the Massachusetts Institute of Technology.

Third Rock Radio station is a project by NASA and RFC Media of Houston to use music and radio to inspire students about science, technology and math. The station can be streamed for free via the TuneIn mobile app and online at http://www.thirdrockradio.net.

Curiosity, the largest rover ever sent to Mars, is beginning a two-year mission to study whether life could ever have survived on the Red Planet.