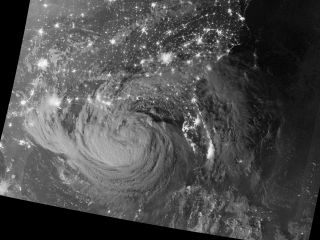 NASA's Suomi-NPP satellite snapped this spectacular photo of then-Tropical Storm Isaac at night from space early on Aug. 28, 2012, as the storm neared the U.S. Gulf Coast. The storm ultimately grew into a Category 1 hurricane before making landfall later in the day.
(Image: © NASA Earth Observatory)

A NASA satellite captured a spectacular photo of what is now Hurricane Isaac from space, a nighttime view showing the then-tropical storm's clouds lit up by moonlight as it approached the U.S. Gulf Coast.

NASA's Suomi-NPP weather tracking satellite recorded the amazing nighttime photo of Isaac just after midnight on Tuesday (Aug. 28). The bright city lights of New Orleans, Houston and Tampa, Fla., can be easily identified, but the photo also includes lights from cities all along the Gulf Coast, Florida and the southeast U.S. coast.

"The image was acquired just after local midnight by the VIIRS 'day-night band,' which detects light in a range of wavelengths from green to near-infrared and uses light intensification to enable the detection of dim signals," NASA officials explained in an image description. "In this case, the clouds of Isaac were lit by moonlight."

Hurricane Isaac is currently a Category 1 hurricane and made two landfalls late Tuesday in Louisiana. As of 10 a.m. EDT (1400 GMT) today (Aug. 29), Isaac is battering Louisiana and neighboring states with drenching rains and maximum sustained winds of 75 miles per hour (120 kilometers per hour), according to the latest National Hurricane Center update.

NASA and the National Oceanographic and Atmospheric Administration are using several satellites to track Hurricane Isaac as it slowly moves across the Gulf Coast.

"Flooding is a big threat from Isaac because of its slow movement, and because it is drawing a lot of energy from the warm waters of the Gulf of Mexico," NASA spokesman Rob Gutro wrote in a hurricane update. "Isolated tornadoes are also possible as Isaac continues moving inland."