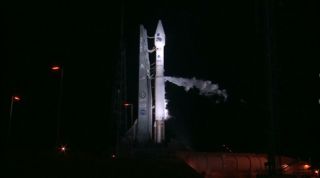 A United Launch Alliance Atlas 5 rocket stands poised to launch NASA's Radiation Belt Storm Probes mission into orbit early on Aug. 25, 2012, from Cape Canaveral Air Force Station in Florida in this still from a NASA video. The launch was delayed due to stormy weather.
(Image: © NASA)

NASA delayed the launch of two new space radiation probes for the second day in a row Saturday (Aug. 25), this time due to stormy weather.

The space agency was attempting to launch the Atlas 5 rocket carrying its twin Radiation Belt Storm Probes from a Cape Canaveral Air Force Station in Florida when nearby thunderstorms  forced mission managers to stand down. NASA's next window to launch the two satellites is on Sunday (Aug. 26) at 4:07 a.m. EDT (0807 GMT).

"Launch managers will meet today at 6 a.m. to assess future launch opportunities and evaluate all of the factors, including the status of the rocket and spacecraft, and the weather," NASA officials said in a statement.

Saturday's postponed launch was the second delay in two days for the Radiation Belt Storm Probes mission. An issue with a rocket tracking beacon, needed to monitor the mission's Atlas 5 rocket during liftoff, thwarted a Friday launch  attempt late in the countdown.

Earlier this week, NASA also pushed back the first launch try by 24 hours, to Friday, to allow time to clear up a separate technical concern with the Atlas 5 rocket.

NASA's $686 million Radiation Belt Storm Probes mission is a two-year project to study the radiation belts around Earth. These belts, called the Van Allen Belts, are regions of harsh radiation that can be affected by strong solar storms, which can pose a threat to satellites and astronauts in orbit, as well as communications and power infrastructure on Earth, mission scientists have said.