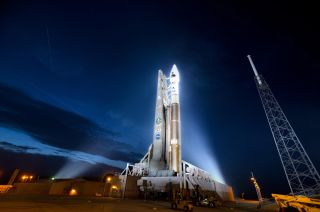 NASA postponed launching two spacecraft into the harsh radiation belts around Earth Friday (Aug. 24) due to an apparent malfunction with a tracking system that monitors the mission's rocket.

The tracking beacon glitch popped up before dawn on Friday, late in the mission's final countdown, prompting NASA to delay the launch of its twin  Radiation Belt Storm Probes from Florida's Cape Canaveral Air Force Station by at least 24 hours. The unmanned Atlas 5 rocket carrying the two satellites is now slated to blast off at 4:07 a.m. EDT (0807 GMT) on Saturday, Aug. 25.

NASA launch director Tim Dunn said the launch countdown was going well until his team spotted a frequency drift in the tracking beacon used by the Air Force's Eastern Range to track the Atlas 5 rocket after liftoff.

"That's a mandatory safety item so that we could track the vehicle in flight," Dunn said in a NASA broadcast after the delay. "It certainly was a situation we wish we didn't have, but we wanted to err on the side of conservatism." [Photos: Inside NASA's Radiation Belt Mission]

Dunn said Saturday and Sunday are still good days to launch the space radiation mission. There is a 60 percent chance of favorable weather for Saturday's launch attempt. NASA initially planned to launch the two satellites on Thursday, but delayed the flight to Friday to clear up a separate technical concern on the Atlas 5 rocket.

The $686 million Radiation Belt Storm Probes mission is a two-year project to study the radiation environment around Earth in unprecedented detail. The twin spacecraft are designed to fly in formation to explore the Van Allen Belts of radiation that encircle the Earth.

The Van Allen Belts are two donut-shaped zones of radiation around Earth. They were first discovered in 1958 by scientist James A. Van Allen and his team using data from the first American satellite Explorer 1. The first belt stretches from the top of Earth's atmosphere out to about 4,000 miles (6,437 kilometers) above the planet. The second radiation belt extends from about 8,000 miles (12,874 km) to more than 26,000 miles (41,842 km) above Earth.

Scientists hope the Radiation Belt Storm Probes mission will help them solve the mystery of how the radiation is created and behaves inside the Van Allen Belts, as well as the regions' role in space weather events— such as strong solar flares from the sun — that can pose a danger to satellites and astronauts in orbit.

The two Radiation Belt Storm Probes are solar-powered and nearly identical. The octagon-shaped satellites are about 6 feet wide (1.8 meters) and just over 4 feet tall (1.3 m). They each carry a set of five instrument suites to study Earth's radiation belts.

When the two spacecraft launch this weekend is determined on the nature of today's tracking beacon problem, Dunn said. Launch team engineers are working to determine whether or not they will have to adjust hardware on the rocket itself, or only on its launch support structures, he said.