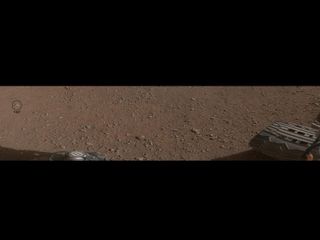 This mosaic image shows the first rock target (N165 circled) NASA's Curiosity rover aims to zap with its Chemistry and Camera (ChemCam) laser. The rock is off to the right of the rover. Image taken Aug. 8, 2012. Released Aug. 17.
(Image: © NASA/JPL-Caltech/MSSS/LANL)

NASA's Mars rover Curiosity is slated to fire its rock-vaporizing laser for the first time this weekend, shortly before the 1-ton robot's maiden drive on the Red Planet.

"Our team has waited eight long years to get to this date, and we're happy that everything is looking good so far," ChemCam principal investigator Roger Wiens, of Los Alamos National Laboratory in New Mexico, told reporters today (Aug. 17). "Hopefully we'll be back early next week and be able to talk about how Curiosity's first laser shots went."

Curiosity, which landed in Mars' huge Gale Crater on Aug. 5, is also gearing up to move its six wheels for the first time. The rover's handlers have said a short test drive could take place around Sol 15 — mission lingo for Curiosity's 15th full day on the Red Planet — which corresponds to Monday or Tuesday (Aug. 20 or 21) Earth time.

"This was a natural target to pick up," said Curiosity chief scientist John Grotzinger, a geologist at Caltech in Pasadena. "It looks really obvious."

Firing up the laser

ChemCam, which is short for Chemistry and Camera, fires a laser at Mars rocks and then determines their chemical makeup by analzying the vaporized bits. It's one of 10 instruments designed to help Curiosity determine if Mars has ever been capable of supporting microbial life.

While researchers haven't turned the laser on yet, ChemCam seems to be in fine working shape, Wiens said.

"We have basically done everything with this instrument except for turn the laser on," Wiens said. "Everything checks out well so far, so we're really optimistic."

Over the next few days, the team will perform some more calibration work with ChemCam, he added. The rover will also photograph N165 before finally shooting the rock with the laser — a milestone that could come Saturday night (Aug. 18), researchers said.

N165 was chosen principally for convenience, Wiens said. The ordinary-seeming rock is close to Curiosity and presents a relatively flat face to the rover, making an inviting target for ChemCam.

"We didn't pick it for its science value per se," Wiens said. "This is sort of a target practice, if you will."

The trek to Glenelg and beyond

Curiosity's primary science target is the base of Mount Sharp, the mysterious 3.4-mile-high (5.5 km) mountain that rises from Gale Crater's center. Mars-orbiting spacecraft have spotted evidence of clays and sulfates in Mount Sharp's lower reaches, suggesting the area was exposed to liquid water long ago.

But Curiosity won't go straight to Mount Sharp. Rather, it will head first for Glenelg, which is a bit out of the way. But the trip is worth it, Grotzinger said, for Glenelg captures much of the geological diversity of Gale Crater's floor and could tell interesting tales of its own.

Curiosity's prime mission is slated to last for two years, which should give the $2.5 billion rover enough time to investigate Mount Sharp's flanks and foothills as well, he added.

The rover's arrival at Glenelg isn't exactly imminent, however. Researchers will likely keep checking out Curiosity and its instruments for another few weeks or so before they feel ready to hit the road. And the trip to Glenelg could take up to two months, depending upon how much science the team wants to do along the way.

The team will probably keep Curiosity at Glenelg for about a month, Grotzinger said. The rover will use its drill for the first time at the site, boring more deeply into Martian rock than any robot has before.

"Sometime toward the end of the calendar year — roughly, real approximately — I would guess then we would turn our sights towards the drive, trek towards Mount Sharp," Grotzinger said.