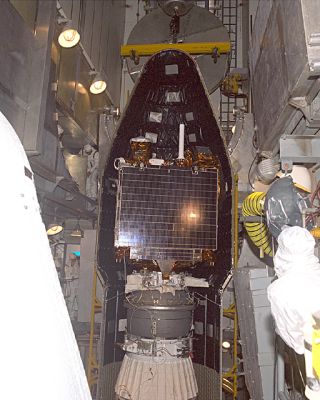 The upper booster of the Mars Global Surveyor being prepared for launch.
(Image: © NASA)

In this historical photo from the U.S. space agency, the Mars Global Surveyor upper stage booster assembly is being encased in the Delta II payload fairing at Launch Complex 17A on Cape Canaveral Air Station, Oct. 29, 1996.

Liftoff of the first in a series of U.S. missions to Mars was just days away, with launch preparations proceeding on schedule. Mars Global Surveyor later entered Mars orbit and began a highly successful mission taking high resolution photographs of the Martian surface and making other measurements.