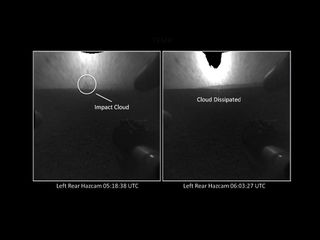 The distant blob seen in the view on left, taken by a Hazard-Avoidance camera on NASA's Curiosity rover is likely the impact cloud from the rover's descent stage after landing on Aug. 5 PDT, 2012. The cloud disappears in later photos.
(Image: © NASA/JPL-Caltech)

A strange cloud on Mars seen by NASA's Curiosity rover just after it landed on the Martian surface this week set the Internet buzzing over what it might be. Was it a dust storm? Part of the rover? Something a bit more … alien-y?

Well, NASA has solved the mystery. The weird blob in Curiosity's first photos was actually the huge dust cloud kicked up by the sky crane descent stage that delivered the rover to the Red Planet.

"The fact that the descent stage flew directly aft of the rover was an amazing coincidence," he added.

The rocket-powered sky crane hovered over Curiosity's landing site and gingerly lowered the 1-ton rover to the Martian surface before cutting its tethers free and flying away to crash at a safe distance. NASA billed the nail-biting landing maneuver as "seven minutes of terror."

The Martian mystery cloud was first spotted by Curiosity just 40 seconds after it landed on Mars late Sunday night (Aug. 5 PDT). The rover's sky crane crashed about 20 seconds after releasing Curiosity, but the descent stage was expected to slam into Mars at more than 100 miles per hour (161 kilometers per hour), so it would have kicked up a huge dust cloud, Sell said. [1st Photos of Mars from Curiosity Rover (Gallery]

The cloud was captured on camera by the rover's rear-facing hazard avoidance cameras (called Hazcams), but then something strange happened. The cloud disappeared.

"In images from the same camera taken 45 minutes later, that artifact isn't there anymore," Sell said. But it wasn't an illusion, he added. "We do know the artifact is real because it appears in multiple Hazcam pictures."

Early speculation by some mission scientists suggested that the cloud could have been dust in the distance, or dust on the clear cover that protected Curiosity's cameras during landing. Now, that mystery seems to be put to bed.

"We're fairly sure that it is the impact plume," Sell said.

The $2.5 billion Curiosity rover is the centerpiece of NASA's Mars Science Laboratory mission, which is expected to spend the next two years exploring Mars' Gale Crater to see if the region could have ever supported microbial life. The mission launched in November 2011.