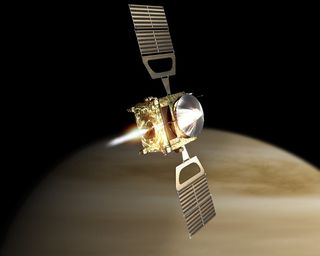 Artist’s impression of the Venus Express orbit insertion burn (the firing of its engine to slow down enough to be captured by the gravity of Venus and enter orbit).
(Image: © Credits: ESA/AOES Medialab.)

Thelaunch of Europe's first Venus probe has been delayed after pad workers foundsigns of contamination atop the spacecraft's Russian-built rocket, the EuropeanSpace Agency (ESA) said Friday.

Originallyset to launch on Oct. 26, the VenusExpress spacecraft will be pushed back "several days" while pad workers removethe probe from its fairing during a series of checks and inspections, ESA officials said ina statement.

Themission has a launch window that extends through November 24, they added.

Builtfor ESA by France's EADS Astrium, Venus Express is set to ride a Soyuz rocketequipped with Fregat upper stage into space in a launch to be staged fromBaikonur Cosmodrome in Kazakhstan. The launch will begin a more than five-monthspaceflight to the second planet in the Solar System.

Insulationreportedly contaminated Venus Express prompting its removal from the fairingand clean-up operations, according to a BBC News report. The contaminationcame either from the spacecraft's protective fairing, which shields it duringlaunch, or the Fregat engine stage designed to propel the probe toward Venus,the report added.

Thelast spacecraft dedicated to taking a close look at Venus was NASA's Magellan probe, whichmapped the planet for about four years after arriving in orbit in 1990.