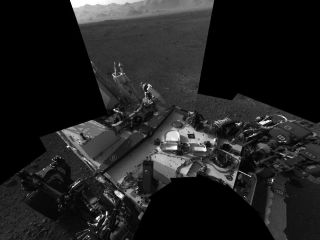 With NASA's Mars rover Curiosity safely on the Red Planet, mission controllers are now preparing the robotic explorer to begin its mission on the Martian surface.

Engineers have been testing the Curiosity rover's instruments and systems ever since the spacecraft touched down on Mars on Sunday (Aug. 5 PDT; Aug. 6 EDT). So far, Curiosity is performing flawlessly, NASA officials said, and the next major procedure is to send the rover new software for its transition from its landing phase into the two-year long haul on the surface of the Mars.

"We're about to upgrade our software on the rover," Mike Watkins, Curiosity mission manager Mike at NASA's Jet Propulsion Laboratory in Pasadena, Calif., told reporters in a news briefing Thursday (Aug. 9). "Just like we upgrade our operating system on our home computer or laptop or something, we're going to do the same thing."

The new software will help mission controllers drive the $2.5 billion Mars rover, use its science instruments and operate its robotic arm.

"We want to switch to this new flight software that's optimized for surface operations," Watkins said.

Mission managers count Curiosity's days in "Sols," which are the number of full Martian days the rover has spent on the Red Planet. [Gallery: 1st Mars Photos by Curiosity Rover]

Curiosity will begin this software transition on Sol 5, which translates to Saturday (Aug. 11) on Earth. The software upgrade process is expected to last roughly four days, Watkins explained. During this time, all other activities, including science, will temporarily be put on hold.

"Those flight software transition days — [Sols] 5, 6, 7 and 8 — are pretty devoted just to that flight software activity, and not to science," Watkins said. "So, we're kind of standing down from science."

The reason for this is to avoid any kind of interference, and to allow enough time for engineers to finish the transfer and verify that everything is functioning according to plan. Once that work is complete, engineers and scientists will continue checking Curiosity's instruments and gathering early science observations.

"We kind of stand down and we'll be back to science the day after that, Sol 9," Watkins said.

After the software transition is carried out, one of the main priorities will be to have the rover beam back more photos that were taken during its first few days on Mars. Curiosity has already snapped an impressive number of pictures since it touched down on the Red Planet.

Yesterday (Aug. 9), NASA released Curiosity's first 360-degree color panorama of its Gale Crater landing site, which was cobbled together from 130 images that are 144 by 144 pixels each. Full-frame versions of some of the pictures used for the panorama are expected to be sent to Earth following the software update, said Michael Malin, of Malin Space Science Systems in San Diego and principal investigator of Curiosity's imaging system, called Mastcam.

NASA launched the Curiosity rover toward Mars in November 2011. The car-size rover is designed to seek out any evidence that Mars is now, or ever was in the past, capable of supporting primitive microbial life.