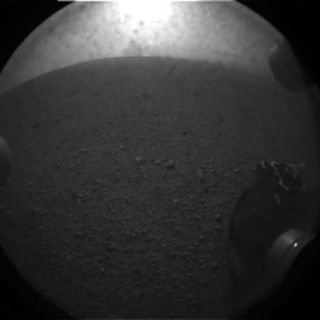 This photo shows one of the six wheels of NASA's huge rover Curiosity on Mars just after the rover's Aug. 5 PDT, 2012 landing in Gale Crater. This image is an enlarged version from the original 256-pixel image.
(Image: © NASA)

PASADENA, Calif. — NASA's huge Curiosity rover appears to have survived its harrowing Mars landing Sunday night (Aug. 5) in fine form, and it's now gearing up for its two-year mission on the Red Planet's surface.

News that the 1-ton Curiosity rover touched down safely inside Mars' Gale Crater came in at 10:32 p.m. PDT Sunday (1:32 a.m. EDT and 0532 Monday), though the six-wheeled robot actually landed about 14 minutes earlier. (That's how long it takes signals to travel from the Red Planet to Earth.)

The rover seems to be in good health after being lowered to the red dirt by a rocket-powered sky crane — a maneuver that had never been attempted before on another planet. And Curiosity has made the mental switch from entry, descent and landing mode to surface mode seamlessly, team members announced today (Aug. 6).

The rover is reporting no serious anomalies or glitches, Watkins added. Initial checks of the car-size vehicle's 10 science instruments look good, though fully vetting their condition will take weeks or months.

Like Curiosity itself, the rover's handlers are now transitioning to surface mode. The biggest activity on the docket for today — its first Martian day, or Sol 1 — is deploying Curiosity's high-gain antenna. This operation should begin at around 6 p.m. PDT (9:00 p.m. EDT; 0100 GMT Tuesday), officials said.

"This allows us to talk directly to the Earth with enough gain that it can actually send data to us, and be more easily talked to by us," Watkins said.

The antenna will take some of the communications pressure off NASA's Mars Odyssey and Mars Reconnaissance Orbiter (MRO) spacecraft, which have been relaying word from the rover back to Earth. Confirmation of last night's successful touchdown, in fact, came via the venerable Odyssey, which has been orbiting Mars since 2001.

Curiosity will also take a five-hour reading today with its Radiation Assessment Detector instrument, or RAD, which gathered data for much of the rover's eight-month space cruise.

On Sol 2, Curiosity will deploy its head-like mast and take some panoramic photos of its surroundings with its navigation cameras, Watkins said. The rover has already sent home a handful of pictures snapped by its hazard-avoidance cameras.

All of these activities are geared toward making sure Curiosity is fully functional and ready to rove. The robot's main mission is to determine if the Gale area is, or ever was, capable of supporting microbial life. It will study the rocks and soil of Gale and Mount Sharp — the mysterious 3-mile-high (5 kilometer) mountain rising from the crater's center — for at least the next two Earth years.

So while landing was a huge moment and a major accomplishment, Curiosity's quest has only just begun.

"We haven't even scratched the surface," Grotzinger said.