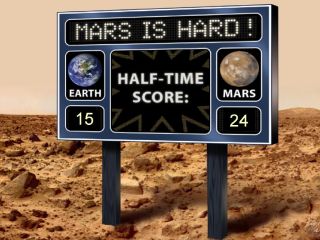 This artist's scoreboard displays a fictional game between Mars and Earth, with Mars in the lead. It refers to the success rate of sending missions to Mars, both as orbiters and landers. Of the previous 39 missions targeted for Mars from around the world, 15 have been successes and 24 failures. For baseball fans, that's a batting average of .385.
(Image: © NASA/JPL-Caltech)

The $2.5 billion rover is on track to land via a rocket-powered sky crane on Sunday, Aug. 5,  at 10:31 p.m. PDT (1:31 a.m. EDT, 0531 GMT on Monday) to begin NASA's two-year Mars Science Laboratory mission. Given the complexity of the rover's entry, descent and landing – portrayed as "seven minutes of terror – a worrisome view is to add "enter miracle here" as part of that touchdown mantra, some say.

"The Mars program right now is in an extremely fragile state," Zubrin told the audience. Missions that were planned have been dislocated and either need to be replaced or new ones put in their place, he said.

Zubrin characterized the MSL mission and its Curiosity rover as NASA putting "so many eggs in one basket" and deciding to get the hardware on Mars using a novel landing system – the Sky Crane. [Curiosity's Nail-Biting Landing in Pictures]

Although the Curiosity rover is not billed as a search for life mission, "conceivably it could detect life on Mars," Zubrin said. The equipment aboard the one-ton, nuclear-powered rover has the scientific smarts to sniff out biogenic sources from non-biogenic sources.

"It could discover all sorts of things," Zubrin said. "Who knows?"

"There's a very good chance, I believe — a certainty in fact — that there’s liquid water underground on Mars. And that is where Martian life could still persist if it is there today,” he added.

In terms of a planning a humans-to-Mars program, NASA has lost focus, Zubrin said. He also labeled the White House Science Advisor, John Holdren, as "hostile" to a visionary space program.

In response to an audience question, Zubrin said international cooperation could play a role in planting humans on the red planet.

"Do we need international cooperation? No. The United States could do this alone or we could do it with the Europeans," Zubrin said.

Alternatively, he drew a parallel with the Olympic Games now underway in London, England.

"This is the kind of space race I’d like to see," Zubrin said. "One that is motivated by the  Olympic spirit of competition … not of hatred but of different nations, different parts of the world, competing with each other to demonstrate excellence, to see who could do the most to advance human knowledge and the human frontier. This is the best form of cooperation … cooperative competition."

There is need to work very hard over the next several years to keep the Mars program robust and progressing forward, said Jim Bell President of the Board of Directors for The Planetary Society and a professor in the School of Earth and Space Exploration at Arizona State University in Tempe.

"Mars is phenomenal landscape in an alien way," Bell said at the Mars Society gathering. He is the lead scientist for the Pancam color imaging system on the Mars Exploration Rovers Spirit and Opportunity, which landed on Mars in 2004.

While Spirit is no longer working, pictures by the Mars Reconnaissance Orbiter show "nobody has stolen it … the wheels are still on," Bell reported.

Concerning the landing of the Mars rover Curiosity, Bell said: “I’m telling you. I think all of us should just have blind faith in our engineering friends. They spent years of their lives building the best possible system …and they are going to get us down there safely.”

Bell called upon the audience to share their passion for space exploration with elected representatives, neighbors, kids and teachers. "We need to get this country charged up" about Mars and exploring space, he said.

The search for life in the universe and our future was spotlighted by Simon "Pete" Worden, director of NASA’s Ames Research Center in Mountain View, Calif.

Mars is a primary candidate for life, Worden told the Mars Society audience. While MSL/Curiosity is a geology mission, he said “this is the first mission potentially able to find real evidence of life.”

If there is the extant life on Mars, Worden added, there will be a bi-partisan reaction about that finding.

“Each new discovery shows you know less than you did previously,” Worden concluded, "which is job security and I love it."