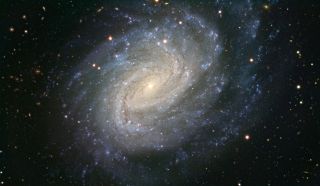 This picture taken with the European Southern Observatory's Very Large Telescope shows the spiral galaxy NGC 1187, which lies about 60 million light-years away in the constellation of Eridanus (The River). NGC 1187 has hosted two supernova explosions during the last thirty years, the latest one in 2007.
(Image: © ESO)

A scintillating spiral galaxy that played host to two supernova explosions in the past 30 years takes center stage in a new image captured by a telescope in Chile's high desert.

The galaxy NGC 1187 is located about 60 million light-years away, in the constellation of Eridanus (The River). The European Southern Observatory's (ESO) Very Large Telescope in Chile captured the most detailed image of this impressive spiral galaxy.

Two separate supernovas have exploded within NGC 1187 since 1982, with the latest one occurring in 2007, ESO officials said in a statement. Supernovas are violent explosions that occur when a star has reached the end of its life. These blasts are some of the most energetic events throughout the universe, and can briefly outshine entire galaxies before they fade away over the course of several weeks or months.

In fact, during the explosion, supernovas can radiate energy comparable to the amount the sun is expected to emit over the course of its entire life, according to ESO officials in an announcement unveiling the new image today (Aug. 1).

Astronomers studied SN 2007Y in great detail, and monitored the supernova using several different telescopes for about a year. This newly released image of NGC 1187 was created from observations that were taken from this roughly year-long study.

Supernova SN 2007Y can even be seen, long after the period of its maximum brightness, near the bottom of the image, ESO officials said.

The photo shows NGC 1187 almost face-on, which offers a clear view of the galaxy's mesmerizing spiral structure. Roughly half a dozen wispy spiral arms can clearly be seen, with bluish specks indicating the presence of stars being born from the clouds of gas and interstellar dust.

The central region of the galaxy is made up of old stars, gas and dust, and can be seen glowing yellow in the new image. NGC 1187 has a subtle central bar structure at its heart, which is thought to help channel gas from the spiral arms to the galactic center, spurring star formation in that region.

In the backdrop, fainter and more distant galaxies can be spotted, including some bright ones that are so luminous they even shine through the disk of NGC 1187. The reddish glow of these other galaxies can be picked out from the pale blue star clusters of NGC 1187.

The spiral galaxy NGC 1187 was discovered by the famed British astronomer William Herschel in 1784.