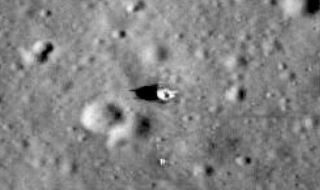 Lunar Reconnaissance Orbiter Camera images of each Apollo site taken at roughly the same orientation but with different sun angles to show the travel of shadows. Combined with knowledge of the Apollo site maps which show where the flag was erected relative to the Lander, long shadows cast by the flags at three sites - Apollo 12, Apollo 16, and Apollo 17 - show that the these flags are still “flying”, held aloft by the poles. There is no indication of a flag shadow in this Apollo 11 image.
(Image: © NASA)

An enduring question ever since the manned moon landings of the 1960s has been: Are the flags planted by the astronauts still standing?

Now, lunar scientists say the verdict is in from the latest photos of the moon taken by NASA's Lunar Reconnaissance Orbiter Camera (LROC): Most do, in fact, still stand.

"From the LROC images it is now certain that the American flags are still standing and casting shadows at all of the sites, except Apollo 11," LROC principal investigator Mark Robinson wrote in a blog post today (July 27). "Astronaut Buzz Aldrin reported that the flag was blown over by the exhaust from the ascent engine during liftoff of Apollo 11, and it looks like he was correct!"

Each of the six manned Apollo missions that landed on the moon planted an American flag in the lunar dirt.

Scientists have examined images of the Apollo landing sites before for signs of the flags, and seen hints of what might be shadows cast by the flags. However, this wasn't considered strong evidence that the flags were still standing. Now, researchers have examined photos taken of the same spots at various points in the day, and observed shadows circling the point where the flag is thought to be. [Video: Moon Photos Prove Apollo Flags Still Stand]

"Personally I was a bit surprised that the flags survived the harsh ultraviolet light and temperatures of the lunar surface, but they did," Robinson wrote. "What they look like is another question (badly faded?)."

Most scientists had assumed the flags hadn't survived more than four decades of harsh conditions on the moon.

"Intuitively, experts mostly think it highly unlikely the Apollo flags could have endured the 42 years of exposure to vacuum, about 500 temperature swings from 242 F during the day to -280 F during the night, micrometeorites, radiation and ultraviolet light, some thinking the flags have all but disintegrated under such an assault of the environment," scientist James Fincannon, of the NASA Glenn Research Center in Cleveland, wrote in the Apollo Lunar Surface Journal.

In recent years, photos from the Lunar Reconnaissance Orbiter have also shown other unprecedented details of the Apollo landing sites, such as views of the lunar landers, rovers, scientific instruments left behind on the surface, and even the astronauts' boot prints. These details are visible in photos snapped by the probe while it was skimming just 15 miles (24 kilometers) above the moon's surface.

LRO launched in June 2009, and first captured close-up images of the Apollo landing sites in July of that year. The $504 million car-size spacecraft is currently on an extended mission through at least September 2012.