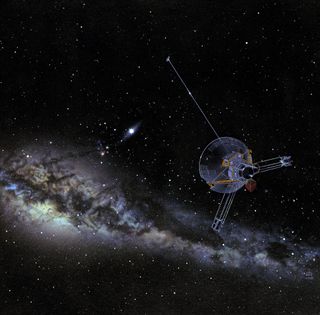 An artist's view of a Pioneer spacecraft heading into interstellar space. Both Pioneer 10 and 11 are on trajectories that will eventually take them out of our solar system.
(Image: © NASA Ames Research Center)

Scientists have finally cracked a decades-old spaceflight riddle, figuring out why NASA's Pioneer 10 and 11 probes began to slow mysteriously as they sped far from the sun.

The cause of the so-called "Pioneer Anomaly," it turns out, is heat coming from the electrical current flowing through the probes' instrument and power systems. This heat pushed back on the spacecraft, causing them to decelerate slightly, according to a new study.

"The effect is something like when you're driving a car and the photons from your headlights are pushing you backward," lead author Slava Turyshev, of NASA's Jet Propulsion Laboratory (JPL) in Pasadena, Calif., said in a statement. "It is very subtle."

Pioneer 10 and Pioneer 11 launched in 1972 and 1973, respectively. They were the first spacecraft to fly through the main asteroid belt, and the first to study Jupiter up-close. The probes kept on cruising after their Jupiter encounters, speeding toward Saturn and beyond. [A Photo Tour of the Planets]

Pioneer 10 and 11 will eventually exit the solar system, but they likely won't be the first to do so. Scientists think the Voyager 1 spacecraft, which is about 11.1 billion miles (17.8 billion kilometers) from Earth, may leave our cosmic neighborhood any day now.

In the early 1980s, mission scientists noticed that the spacecraft were slowing down unexpectedly. But they dismissed this as a transient phenomenon resulting from dribbles of propellant left in the probes' lines, researchers said.

The issue didn't go away, however. In 1998, when Pioneer 10 and 11 were more than 8 billion miles (13 billion km) from the sun, a team of researchers calculated that the spacecraft were declerating at a rate of about 300 inches per day squared (0.9 nanometers per second squared).

The scientists couldn't explain the slight slowdown, so they raised the possibility that some new type of physics that contradicted Albert Einstein's general theory of relativity may be responsible.

Digging through the data

In 2004, Turyshev started trying to get to the bottom of the Pioneer Anomaly. He couldn't rely on any new data, because the two spacecraft had stopped communicating with Earth; scientists last received a signal from Pioneer 10 in 2003 and Pioneer 11 in 1995.

So Turyshev and his colleagues searched through old Pioneer communications and data, copying digitized files from JPL navigators who helped steer the Pioneers and receiving more information from other NASA centers.

They also found more than a dozen boxes of magnetic tapes stored under a staircase at JPL, researchers said, and worked with a Canadian programmer to create software that could read the tapes and clean up Pioneer data.

In the end, Turyshev and his team collected more than 43 gigabytes of information, which may not seem like much now but was a huge trove for the 1970s.

After poring over all this information, the scientists were able to trace the Pioneer Anomaly to the heat coming from the spacecraft's power and electrical systems. Further, they determined that the issue wasn't affecting other spacecraft nearly as much, mostly because of differences in design.

"The story is finding its conclusion because it turns out that standard physics prevail," Turyshev said. "While of course it would've been exciting to discover a new kind of physics, we did solve a mystery."

The study was published June 12 in the journal Physical Review Letters.