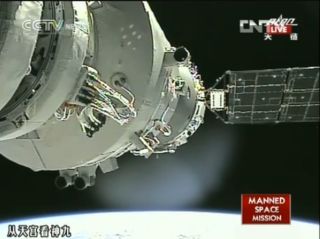 This still from a CNTV broadcast shows China's Shenzhou 9 space capsule just after it was manually docked to the Tiangong 1 space lab by astronaut Liu Wang on June 24, 2012.
(Image: © CNTV/CCTV)

"Chinese astronauts have their own home in space now," Shenzhou 9 commander Jing Haipeng told Chinese president Hu Jintao during a congratulatory space call Tuesday (June 26), according to Xinhua. "We are proud of our country!" [Photos of Shenzhou 9 Mission]

Shenzhou 9 launched on June 16 carrying three taikonauts, including 33-year-old Liu Yang, the nation's first woman in space. The mission aimed to pull off China's first-ever manned space docking, and it succeeded — twice. The vessel hooked up with Tiangong 1 via remote control on June 18 and then again June 24 with the taikonauts at the wheel.

China thus became just the third country to performed a manned docking in orbit. The United States and Russia first accomplished the feat in 1966 and 1969, respectively.

Shenzhou 9's flight is testing technology and techniques needed to build a permanently staffed space station in Earth orbit. Chinense officials have said the nation hopes to have a 60-ton station up and running by 2020.

For comparison, the $100 billion International Space Station weighs about 430 tons. The huge orbiting lab is run by a consortium of more than a dozen countries, but China is not among them.

China's space dreams don't end in low-Earth orbit. The nation has said it wants to return lunar samples to Earth with a robotic spacecraft by 2016 or so, and it plans to put a taikonaut on the moon sometime after the space station is built.

Shenzhou 9 is China's fourth manned space mission, with the other three flights coming in 2003, 2005 and 2008. The nation plans to launch another crew to Tiangong 1 soon, perhaps by the end of the year.

Tiangong 1 has been circling Earth since September 2011, and in November it linked up with the robotic Shenzhou 8 vessel, achieving China's first unmanned space docking.