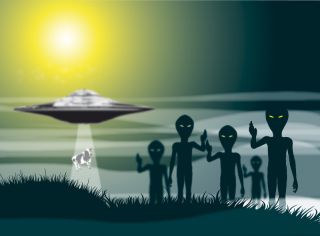 Dozens of scientists, artists and entertainers are gathering in Silicon Valley this weekend to discuss the search for intelligent aliens and humanity's place in the universe.

They're coming for SETICon 2, which runs Friday-Sunday (June 22-24) in Santa Clara, Calif. The meeting is organized by the SETI (Search for Extraterrestrial Intelligence) Institute, which is based in nearby Mountain View.

SETICon 2's main goal is to explore our place in space and the future of the search for alien life, conference organizers said.

SETICon 2 isn't a typical scientific conference packed full of academic presentations. The meeting aims to be more accessible to the public, so it features less-technical talks, panel discussions and interviews, along with film screenings and other events.

Many scientists who work on NASA's Kepler mission, which has detected more than 2,300 potential alien planets since its March 2009 launch, will also talk. They include Geoff Marcy,  Debra Fischer and Jon Jenkins, among others.

SETICon 2 serves as something of a sendoff for astronomer Jill Tarter, who is retiring after spending the last 35 years scanning the heavens for signals from alien civilizations. Tarter, the inspiration for heroine Ellie Arroway in the novel and movie "Contact," announced last month that she's stepping down as director of the SETI Institute's Center for SETI Research.

Tarter will shift to a full-time fundraising role for the Institute, which had to shut down a set of alien-hunting radio telescopes for seven months last year due to budget shortfalls. A gala dinner Saturday night will celebrate the astronomer and her career.

The first SETICon meeting was held in August 2010, also in Santa Clara.