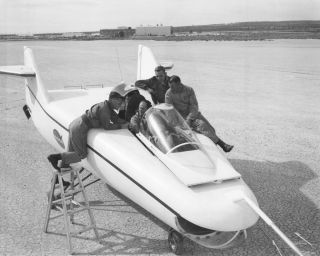 The M2-F1 with pilot Chuck Yeager and from left to right Milt Thompson, Don Malick and Bruce Peterson.
(Image: © NASA.)

In this historical photo from the U.S. space agency, the M2-F1 lifting body aircraft rests on the sun-baked floor of a dry lake bed located out in the Mojave Desert at the Dryden Flight Research Center, California on Nov. 12, 1963. The wingless M2-F1 was an unlikely forerunner to the Space Shuttle. It was the world's first manned lifting body, but not quite ready for primetime. The M2-F1 was made of wood with an internal framework of steel tubes. NASA described it this way: It “looked like a bathtub sitting on a tricycle.”

A lifting body was not a conventional winged aircraft but rather used air flowing over its fuselage to generate lift. This design would allow it to re-enter the atmosphere and land on a runway like a conventional airplane.

Because the M2-F1 was unpowered, a tow vehicle was required. Walter "Whitey" Whiteside, a hot-rod enthusiast who worked at the center, was sent to purchase a new 1963 Pontiac convertible. Following modification at two race shops, the car was capable of reaching 110 mph with the M2-F1 in tow.

In the above photo, pilot Chuck Yeager, seated in the cockpit of the M2- F1, talks with fellow pilots from left to right Milt Thompson, Don Malick and Bruce Peterson. All three flew the lifting body in several flights. The vehicle later suffered a mishap when Peterson was landing it: Oil in the landing gear hydraulics was not suitable for cold temperatures and caused the gear to break and the vehicle to suffer minor damage.