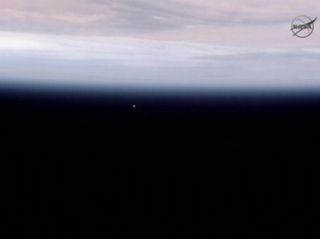 SpaceX's Dragon spacecraft (bright light) is seen in cameras mounted to the exterior of the space station during its first flyby in this still from a NASA broadcast on May 24, 2012.
(Image: © NASA TV)

New photos taken by the private space capsule Dragon offer an intimate view of its groundbreaking mission to the International Space Station.

The unmanned Dragon spacecraft, built by Space Exploration Technologies Corp. (SpaceX), launched Tuesday (May 22) to become the first non-governmental vehicle to dock at the space station. The capsule made its first flyby of the station early this morning (May 24), and is expected to arrive at the orbiting laboratory tomorrow.

A series of photos taken by cameras onboard the unmanned capsule show the view both inside and out during the mission, a final test flight before Dragon can be certified to deliver cargo to the space station.

One view shows the inside of the SpaceX capsule, which measures 14.4 feet tall (4.4 meters) and 12 feet wide (3.7 m), packed with crew rations, clothing and supplies, as well as science experiments designed by students.

Another image reveals the critical deployment of Dragon's solar arrays. Though these energy-providing panels had been opened during tests on Earth, never before had they been unfurled in orbit. Had they failed, Dragon would not be able to carry out its rendezvous as planned.

A photo taken on launch day also shows a view of the door of Dragon's guidance, navigation and control panel. Opening this door was another critical step after launch to ensure mission success.

SpaceX also released a photo taken of Earth from Dragon by the capsule's thermal imager, which will be used during its rendezvous and docking with the International Space Station.

Dragon is due to spend just under a week linked with the station, before being loaded with cargo and sent to return back to Earth and splash down in the Pacific Ocean.