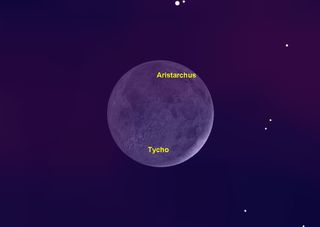 Skywatchers, take note: Tonight (May 23) and tomorrow night will offer excellent opportunities to observe the so-called "dark side" of the moon.

The new moon occurred on Sunday evening (May 20), marked by an annular eclipse of the sun as the moon passed in front of it. The moon has now moved to the east of the sun, but is still mostly lit from behind. Only a slim crescent on the moon's east side is in full sunlight.

If you look at the crescent moon closely, especially with binoculars or a small telescope, you will probably see a faint outline of the full globe of the moon. This ghostly moon is lit by light reflected from the nearly full Earth in the moon's sky. [Earth's Moon Phases Explained (Infographic)]

This effect of "earthlight" or "earthshine" is sometimes described as seeing the old moon in the new moon's arms.

With binoculars or a telescope, it's easy to pick out the brighter features we are familiar with from the full moon. Remember that the moon always keeps the same face toward the Earth as it orbits  our planet. Two craters in particular stand out: Aristarchus in the northwestern quadrant of the moon and Tycho near the moon's south pole.

Many people are confused by the fact that the young moon often seems to be lit from below. Since the sun, the main source of light on the moon, is usually below our horizon when we view the moon up in the sky at night, it should come as no surprise that the moon appears lit from below.

What is unusual is to see the moon lit directly from the left or right side: That's something you usually see only in textbooks, never in the real sky. The only time direct sidelight is possible is when we view the moon in full daylight, when the sun is at the same altitude as the moon.

When observing the dark side of the moon, keep your eyes peeled for tiny flashes of light: lunar meteors. It's very rare for a meteor to kick up enough light when hitting the moon's surface to be visible from Earth, but it has happened, and has been confirmed by photographs from different locations, usually during the Leonid meteor shower.

Editor's note: If you snap an amazing picture of the moon that you'd like to be considered for use in a story or gallery, please send images and comments to SPACE.com managing editor Tariq Malik at tmalik@space.com.