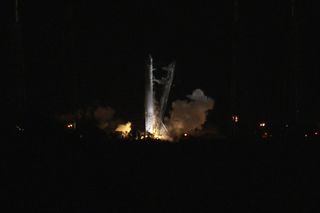 CAPE CANAVERAL, Fla. — The private rocket company SpaceX is hoping the second time's the charm for its planned launch of the Dragon capsule to the International Space Station.

The company had planned to launch the unmanned Dragon May 19, but an engine glitch on its Falcon 9 rocket in the last second before liftoff forced an abort. Engineers traced the issue to a failed check valve in the engine, and replaced it Saturday evening.

Dragon's inaugural trip to the space station will be the first visit there of a non-governmental vehicle. The mission is the final test flight before the capsule is certified to begin delivering cargo to the station under a deal through NASA's COTS program (Commercial Orbital Transportation Services).

"The partnership we've been able to forge between NASA and SpaceX has been a huge success story," Phil McAlister, NASA's director of Commercial Spaceflight Development.  "This partnership with two very different organizations, cultures, expectations, histories, have come together and stood the test of time."

It will be the second trip to orbit for a Dragon capsule, which first launched in December 2010. Falcon 9 has made two launches before, both successful.

Though the stakes are high for SpaceX to prove itself, as well as validate NASA's new approach toward partnering with commercial space companies, both the firm and the space agency have maintained that the upcoming flight is a test, and comes with risks.

"This is a test flight," SpaceX president Gwynne Shotwell said during a briefing last week. "What's important form a SpaceX perspective on a test flight is to make sure we learn something."