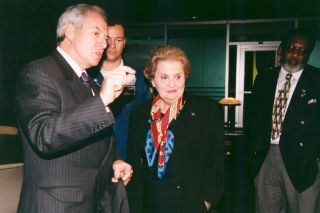 In this historical photo from the U.S. space agency, U.S. Secretary of State Madeleine Albright talks with NASA Administrator Daniel Goldin (left) in the VIP lounge at the Kennedy Space Center's Apollo/Saturn V Facility on Dec. 3, 1998, while awaiting launch of STS-88, the first U.S. launch for the International Space Station. Astronaut Michael Lopez-Alegria and an along with an unidentified man (on the right) are in the background.

The 12-day mission began assembly of the International Space Station (ISS). On Dec. 5, the 12.8-ton Unity connecting module was first connected to Endeavour's docking system; on Dec. 6, using the 50-foot-long robot arm, the Zarya control module was captured from orbit and mated to Unity; and astronauts Ross and Newman conducted three space walks to attach cables, connectors and hand rails. The two modules were powered up after the astronauts' entry.