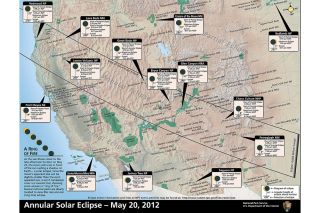 When the sun vanishes behind the moon for the first time over the United States in this century, what better place to enjoy the view than from one of the 154 national parks that stand in its path?

Astronomy lovers in the United States will be treated to a partial disappearance of the sun behind the moon this Sunday (May 20). Only the Eastern Seaboard will be totally exempt. Over the course of the solar eclipse, the sun won't vanish completely, but will remain as a ring around the moon for what is known as an annular eclipse. When the eclipse occurs, the moon will be near its most distant point from Earth, making it appear smaller in the sky and thus unable to block the entire sun. But it will still be a stunning sight.

Thirty-three national parks will see the full effect of the moon's interference. Many western parks will be offering an array of events for their guests, ranging from placing telescopes out for viewing up to a full-scale astronomy festival.

"We're lucky that so many parks happen to lie within the path of the annular eclipse," Grand Canyon park ranger Marker Marshall told OurAmazingPlanet.

The Grand Canyon park staff, along with the help of the Tucson Amateur Astronomy Association, will be setting up solar telescopes and helping people safely view the eclipse. NASA scientists will be present to talk about the eclipse, as well as recent lunar findings. They will also have eclipse glasses for sale and will demonstrate how to use binoculars to safely set up a projection of the eclipse on a piece of paper. After the eclipse, the park will host a star party. [Top 10 Most Visited National Parks]

Marshall noted that, like other national parks, the Grand Canyon boasts signs warning people not to look directly at the sun, or to view the sun through telescopes, binoculars or cameras without a solar filter. Doing so will damage your eyes.

At Bryce Canyon National Park in Utah, the annual Astronomy Festival has been moved to coincide with eclipse weekend. Great Basin National Park in Nevada will hold a pre-eclipse party Saturday night with a presentation by an actor playing Galileo, and a special program on Sunday. Several parks will instruct guests on how to make a pinhole viewer of their own to safely observe the eclipse. Several other parks are receiving assistance from their local amateur astronomy clubs to help the public safely watch the show.

Visitors should bring flashlights and jackets, especially if they plan to stay after the eclipse concludes.

"People come to parks to enjoy a dark night sky, and see things like the Milky Way," Marshall said.

"We can really facilitate people seeing even daytime events," she added.

But Marshall warns that, while the eclipse will make an interesting image, it won't necessarily make a great photograph.

Aiming a camera at the eclipse unprotected could damage it. Hopeful photographers need to add a solar filter to their setup, which will wash out the view of the landscape.

"The casual photographer won't be able to get a photo of the eclipse over the canyon," she said.

Instead, she urges people to enjoy the image captured in their memory.

And there will be plenty of memories made. According to Marshall, all of the campgrounds and hotels around the Grand Canyon that take reservations are booked. Though the first-come, first-serve campgrounds are still available, she anticipates that they, too, will fill quickly, leaving hopeful visitors with a drive of more than an hour to the nearest hotel.

Although only a handful of western parks will receive the full effect of the eclipse, another 125 parks lay along the path of the partial eclipse, where they will provide a stunning view to those not fortunate enough to see the complete show. From Alaska to Minnesota, national parks will catch a partial eclipse or a partial view.

"Astronomy generally is the kind of thing people look for in national parks, so we're glad to help people celebrate it here," Marshall said.

This article was provided by OurAmazingPlanet, a sister site of SPACE.com.  Follow OurAmazingPlanet for the latest in Earth science and exploration news on Twitter @OAPlanet and on Facebook.