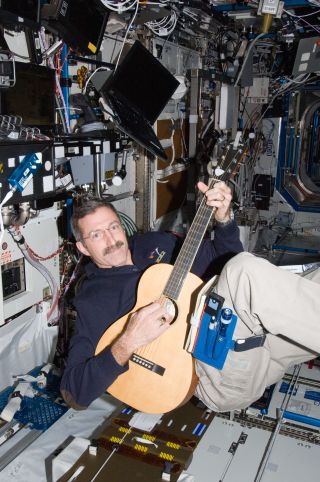 UPDATE for Thursday, May 10! Thank you for all your questions. We were able to ask some of them and you can see the full video now here:

Re-Entry: An Astronaut's Return To Life On Earth

If you ever wondered what it's like to take charge of a $100 billion space station, you'll have a chance to ask someone who knows on Thursday (May 10). That's because SPACE.com will speak with NASA astronaut Daniel Burbank and we want to know what burning questions you have for him.

Burbank is readapting to life on Earth after months in command of the space station. He returned to Earth on April 27 on a Russian Soyuz capsule.

SPACE.com managing editor Tariq Malik will interview Burbank at 7 a.m. EDT (1100 GMT) live on NASA Television and he'll try to answer as many reader questions as possible during the 10-minute video chat. The questions, however, should be submitted in advance in the comment section of this story.

Burbank, 50, spent nearly 5 1/2 months aboard the International Space Station, much of that as commander of the station's Expedition 30 crew. He was there to photograph spectacular views of comet Lovejoy on Earth's horizon and spent countless hours overseeing science experiments and maintenance work on the orbiting lab.

A native of Yarmouthport, Mass., Burbank  is a 1985 graduate of the United States Coast Guard Academy. He was selected to join NASA's astronaut corps in 1996 and flew on two space shuttle missions — the STS-106 mission aboard Atlantis in 2001 and the STS-115 flight on the same shuttle in 2006 — before launching to the space station on Expedition 29/30 in November 2011.

Burbank has spent 189 days in orbit during his spaceflight career.

So here's the question: What would YOU ask veteran astronaut Dan Burbank?

We want to know!