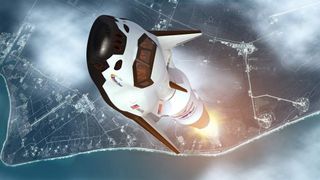 COCOA BEACH, Fla. — Sierra Nevada Corp., one of four firms working on space taxi designs for NASA, is stepping up plans to expand its work force and operations in Florida, company and state officials announced May 4.

"The goal that we have here is really quite simple — we want to take the 'Help Wanted' signs out of the windows in Russia and bring it back here," Mark Sirangelo, executive vice president of Sierra Nevada's Space Systems Group, said during an announcement here.

The Louisville, Colo.-based firm is developing a small-winged vehicle called Dream Chaser that can carry up to seven astronauts, or a mix of crew and cargo, to and from the international space station. The company so far has been awarded $125 million from NASA for design and development work on the reusable space plane, about half of which already has been paid.

Sirangelo told Space News his company has made a "significant" financial investment in the project as well, though not as much as what NASA has contributed.

It is among several firms vying for NASA’s next round of funding for the Commercial Crew Development program. The agency has $406 million to spend this year and hopes to award multiple 21-month contracts this summer worth between $300 million and $500 million for integrated design work.

If selected, Sierra Nevada plans to base its fleet of three to five spaceships at a still-to-be-determined facility at Kennedy Space Center or Cape Canaveral Air Force Station. Former space shuttle workers are being recruited to process, launch and service the vehicles, which would take off aboard a United Launch Alliance Atlas 5 rocket and land on the Shuttle Launch Facility runway.

"This is not a paper program. We are well into the manufacturing and starting to test," Sirangelo said.