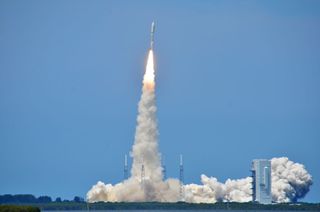 The U.S. Air Force's AEHF 2 communications satellite blasts off atop an Atlas 5 rocket on May 4, 2012.
(Image: © collectSPACE.com/Robert Pearlman)

The United States Air Force launched an advanced communications satellite today (May 4), the second in a new fleet of spacecraft that should improve American and allied military commanders' ability to control their forces around the globe.

The Air Force's Advanced Extremely High Frequency 2 (AEHF 2) satellite lifted off at 2:42 p.m. EDT (1842 GMT) from Florida's Cape Canaveral Air Force Station, riding toward a preliminary orbit aboard an Atlas 5 rocket. The spacecraft will work its way toward its final geosynchronous orbit, about 22,300 miles (35,888 kilometers) up, over the next three months or so, officials have said.

The launch was originally slated for Thursday (May 3), but a flow problem in one of the Atlas 5's systems pushed things back a day.

The $1.7 billion satellite is part of the AEHF network, which could ultimately include up to six spacecraft. The new constellation is an upgrade over the military's current Milstar system of five functioning satellites, the first of which launched in 1994.

"The second AEHF spacecraft will provide greater connectivity, flexibility and control to U.S. and international partner forces," said Col. Michael Sarchet, the government's AEHF program manager, in a statement. "The AEHF constellation will augment and replace the venerable Milstar constellation, improving on many capabilities to include 10 times greater throughput."

AEHF will provide global, secure, jam-resistant communications for military operations on land, sea and air, officials said. The network features the highest levels of encryption, and it will allow commanders to control their forces "at all levels of conflict through general nuclear war," according to an Air Force fact sheet.

As its name implies, AEHF 2 is the second satellite in the fleet to launch. AEHF 1 blasted off in August 2010, but its main engine failed to fire as planned to lift it to its final orbit. The spacecraft's controllers managed to save it, however, using secondary thrusters to boost it to the correct location over a span of 14 months.

Aerospace firm Lockheed Martin builds the AEHF spacecraft for the Air Force. The satellites weigh about 7 tons and have power-generating solar panels 89 feet long (27 meters). They're designed to operate for at least 14 years in orbit.

The Air Force's current plan calls for launching a total of four AEHF satellites, though negotiations to add two more spacecraft to the fleet are ongoing, Air Force officials said.