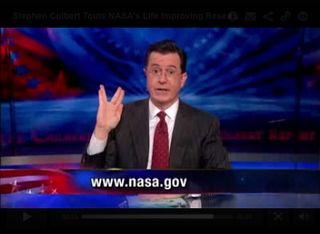 Veteran Apollo astronaut Buzz Aldrin, the second man to walk on the moon, graced the small screen Thursday (May 3) to present TV comedian Stephen Colbert with a special award for his work in promoting space exploration to the public.

"I could not be T-minus more excited to receive the National Space Society's Space Pioneer Award for Mass Media," Colbert said on the show, before welcoming Aldrin onto the set with him.

Aldrin is a member of the National Space Society's board of governors. The nonprofit organization aims to foster the creation of a robust spacefaring nation.

"I'm a big supporter for spacefaring, but not spacefare, which is welfare for aliens," Colbert joked, before mentioning that the NSS board includes actor Tom Hanks and politician Newt Gingrich, who recently bowed out of the 2012 Republican Party presidential nomination race. [Photos: Stephen Colbert Visits NASA]

Aldrin, who was the lunar module pilot on NASA's historic Apollo 11 mission that landed on the moon, expressed gratitude on behalf of the NSS for Colbert's interest in space exploration.

"A while back, I was chairman of the Space Society," Aldrin said, adding that the organization strongly supports commercial ventures to the International Space Station, and exploration efforts beyond Earth, to the moon, to an asteroid, and beyond the moons of Mars.

"We want to thank you for promoting space exploration," Aldrin said to Colbert.

The former astronaut, who donned a fun, space-themed tie for the occasion, then played along as Colbert recreated the atmosphere of an award ceremony. The TV comedian had Aldrin read the names of other pretend nominees, which included actress Meryl Streep, cartoon character Elroy Jetson and ABC's popular sitcom "Modern Family," before announcing him as the winner.

"Thank you so much," Colbert said after he was presented with the award. "It is a true honor. A true honor. I want to thank you. I want to thank the National Space Society. I accept this award on behalf of every kid who dreamed of growing up to be an astronaut, but instead went into television. And I accept it on behalf of all their kids, who I think should still dream of growing up to become an astronaut like Buzz Aldrin."

Colbert has been a vocal fan of NASA and the country's space program. In fact, an exercise treadmill on the International Space Station was named after the comedian. The $5 million Combined Operational Load-Bearing External Resistance Treadmill (or COLBERT) was part of a consolation prize for the TV host, who won an online NASA contest for the naming rights to a new space station module in 2009.