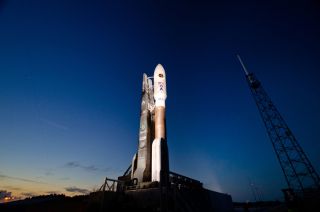 The U.S. Air Force has postponed the planned launch of an advanced new communications satellite by at least one day due to a technical glitch that cropped up during an attempted liftoff today (May 3).

The Air Force's Advanced Extremely High Frequency 2 (AEHF 2) satellite was supposed to blast off at 2:46 p.m. EDT (1846 GMT) from Florida's Cape Canaveral Air Force Station atop an Atlas 5 rocket. However, the launch team detected a flow problem in one of the Atlas 5's systems, and engineers weren't able to fix it in time to get off the ground today.

The $1.7 billion satellite is part of the AEHF network, which could ultimately include up to six spacecraft. The new constellation is an upgrade over the military's current Milstar system of five functioning satellites, the first of which reached orbit in 1994. AEHF 1 launched in August 2010.

AEHF will provide global, secure, jam-resistant communications for military operations on land, sea and air, officials said. The network features the highest levels of encryption, and it will allow commanders to control their forces "at all levels of conflict through general nuclear war," according to an Air Force fact sheet.