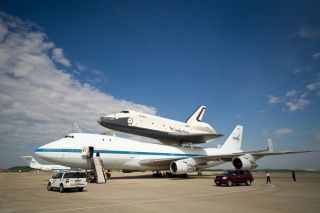 NEW YORK - NASA's prototype shuttle orbiter Enterprise, which had been on display at the Smithsonian National Air and Space Museum since 2003, is set to fly to the Big Apple today (April 27).

The space shuttle will be carried piggyback by a specially modified Boeing 747 jumbo jet. En route, the linked planes will make low flyovers above the Intrepid, the Statue of Liberty, and other landmarks.

This flight was originally slated for Monday (April 23), but was postponed due to cloudy and rainy weather. NASA and Intrepid officials are hoping the skies hold clear this morning to allow the move. [Photos: A Space Shuttle Called 'Enterprise']

Intrepid, which is housed on a retired U.S. Navy aircraft carrier on the west side of Manhattan, is preparing a temporary bubble tent to cover Enterprise on the ship's deck. When that is ready, Enterprise will be transported from JFK up the Hudson River by barge.

Eventually, the museum plans a permanent showcase for the orbiter in a separate building. That building, however, will likely take two to three years to complete.

Enterprise never flew to space, but it was the first space shuttle built by NASA. Named after the fictional starship Enterprise from the 'Star Trek' TV series, the orbiter prototype was used for glide flights to test the space shuttle design and its unpowered landing approaches.

Enterprise was moved from the Smithsonian to make way for the retired space-flown orbiter Discovery, NASA's most-traveled shuttle. That orbiter arrived in Virginia last week, and is now on public display at the Smithsonian's Steven F. Udvar-Hazy Center in Chantilly, Va.

NASA's two other space shuttles, Endeavour and Atlantis, are also slated to be sent to museums this year. Endeavour is bound for the California Science Center in Los Angeles, while Atlantis will stay close to its home spaceport at the Kennedy Space Center Visitors Center in Cape Canaveral, Fla.

If you snap an amazing photo of space shuttle Enterprise soaring over the New York City skyline and would like to share it with SPACE.com for a photo gallery and story, send it to senior writer Mike Wall at: mwall@space.com.