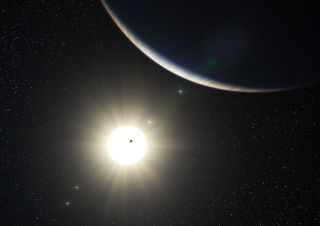 A star already known to host five alien planets may actually be home to a whopping nine full-fledged worlds - a planetary arrangement that, if confirmed, would outnumber our own solar system and set a new record for the most populated system of extrasolar planets yet found.

The sun-like star, called HD 10180, is located approximately 127 light-years away from Earth. In a previous study that was published in August 2010, astronomers identified five confirmed alien worlds and two planetary candidates.

Now a new study confirms both previous candidates in the HD 10180 system, and also suggests that two more planets could be orbiting the star. This could bring the tally up to nine planets, said lead author Mikko Tuomi, an astronomer at the University of Hertfordshire in the U.K. Our solar system, by comparison, has eight official planets (with Mercury closest to the sun and Neptune at the farthest end). Pluto and several other smaller objects are considered dwarf planets, not full-blown worlds.

"The data indicates that there are not only seven but likely as many as nine planets in the system," Tuomi told SPACE.com in an email interview. "The two new planets appear to have orbital periods of roughly 10 and 68 days and masses of 1.9 and 5.1 times that of Earth, which enables the classification of them as hot super-Earths, i.e. planets with likely scorchingly hot rocky surfaces."

Tuomi re-analyzed observations collected between November 2003 and June 2010 by the planet-hunting HARPS spectrograph instrument, which is mounted on a 3.6-meter telescope at the European Southern Observatory in La Silla, Chile. [Infographic: Planets Large and Small Populate Our Galaxy]

Since the newly detected candidates are still unconfirmed, more research is needed to determine if they are bona fide planets, and not erroneous signals.

"While the existence of the larger of these two is well supported by the data, the signal corresponding to the smaller one exceeds the detection threshold only barely, which gives it a very small but non-eligible probability of being a false positive," Tuomi said.

Since the planets in the HD 10180 system are too distant to be directly observed, astronomers use HARPS to monitor the gravitational pulls that the planets exert on their host star.

Observations of the masses of the new planetary candidates and their distances from the star indicate that they likely have orbital periods of approximately 10 and 68 days. They are likely both rocky planets with surfaces hotter than that of Mercury, Tuomi added.

But even if they are confirmed as actual planets, neither are located in a circumstellar region known as the habitable zone, where conditions could be suitable for liquid water to exist on a planet's surface.

"They are certainly not in the habitable zone and likely have no prospects for hosting life," Tuomi said. "However, one of the Neptune-sized planets in the system with an orbital period of 600 days is actually in the middle of the habitable zone, which makes it an interesting target when the better detection methods enable us to observe moons orbiting exoplanets in the future."

As instruments and observatories become more sophisticated, and as astronomers hone planet-hunting techniques, densely populated systems similar to HD 10180 and our own solar system could be discovered in greater numbers.

"This certainly tells our methods are sufficient for detecting richly populated planetary systems," Tuomi said. "Just how common they are, we do not know based on only two examples. My guess would be that they are very common, though, because they are very hard to detect and we already have one when the precision of our instruments enables the detection of these systems only barely."

The finding also suggests that similar planetary systems could be more common throughout the universe than was previously thought.

"Scientifically this would not be of much significance because it has been suspected for a long time that such populous planetary systems exist in the universe," Tuomi said. "Philosophically, though, it shows that our very own solar system is not special in this respect either — systems with great numbers of planets are very likely common throughout the universe and it is only a matter of time when we find even richer systems."

The study has been accepted for publication in the journal Astronomy and Astrophysics.