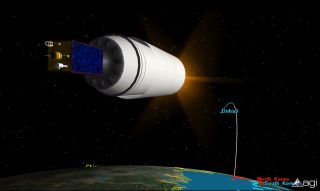 As the world watches and waits to see if North Korea will continue in its bid to launch a long-range rocket despite international warnings, a new video animation reveals just how the space test could occur.

"AGI has used its software to produce a video demonstrating the launch and its possible path, tracking assets and landing zones," AGI officials wrote in a media alert.

North Korean space officials have said the Unha-3 rocket will launch a new Earth-observing satellite sometime between April 12 and April 16 to honor the 100th anniversary of the birth of Kim Il Sung, the founder of North Korea. Critics of the launch, which include the United States, Japan and South Korea, claim the launch is a cover for a missile test that violates United Nations Security Council resolutions. [Images: North Korea's Rocket and Missile Program]

According to AGI's video animation of the Unha-3 rocket launch, the three-stage booster will blast off from the new North Korean launch site near the northwest village of Tongchang-ri, which corresponds with official statements from North Korea and Western observers. The rocket will then head in a southerly direction and drop its first stage in the Yellow Sea well to the west of South Korea, where officials have said they would shoot down any parts of the Unha-3 territory that threatened to fall on South Korean territory.

The next stage of the Unha-3 rocket would likely fall just to the east of the Philippines after the booster's third stage and payload — the Earth-monitoring satellite Kwangmyongsong-3 — separates and heads towards orbit, the AGI animation shows.

North Korea's Unha-3 rocket appears to be a liquid-fueled rocket that stands about 100 feet (30 meters) tall. The Kwangmyongsong-3 satellite, meanwhile, is a boxy, solar-powered spacecraft, according to videos and images in media reports, as well as the AGI video.

Exactly which day of the current window North Korea will launch the Unha-3 rocket is not yet certain, though the country's space organization did begin fueling the rocket for liftoff on Wednesday, suggesting a potential launch attempt in upcoming days, according to press reports.