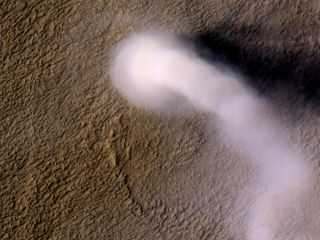 A gigantic dust devil races across the surface of Mars in a stunning new photo snapped by a NASA spacecraft.

NASA's Mars Reconnaissance Orbiter (MRO) captured the 12 mile-high (20 kilometer) twister as it whirled its way through the Amazonis Planitia region of northern Mars on March 14. Despite its towering height, the dust devil is just 210 feet (64 meters) wide, researchers said.

The plume's shadow is also clearly visible in the new image, as are some topographic features on the Red Planet's complex surface.

Dust devils occur on both Earth and Mars. They are spinning columns of air, made visible by the dirt they suck off the ground. Unlike tornados, dust devils usually form on clear days when the ground soaks up heat from the sun. If conditions are right, heated air near the surface may begin to rotate as it rises through small pockets of cooler air just above it.

Just as on Earth, Martian winds are fueled by solar heating. Though Mars is now near aphelion — the time of Martian year when the Red Planet is farthest from the sun — it still receives enough solar energy to drive dust devils across its surface.

The new image was taken during Mars' late northern spring, two weeks short of the northern summer solstice— a time when the ground in the northern mid-latitudes is being heated most strongly by the sun, researchers said.

MRO has been examining Mars with six science instruments since arriving at the Red Planet in March 2006. The spacecraft continues to provide valuable insights into the planet's ancient environment and how processes such as wind, meteorite impacts and seasonal frosts are continuing to affect the surface of Mars today, NASA officials said.

NASA launched MRO in September 2005. The $720 million mission is NASA's youngest Mars orbiter flight to date, but it has beamed more data to Earth than all other interplanetary missions combined.