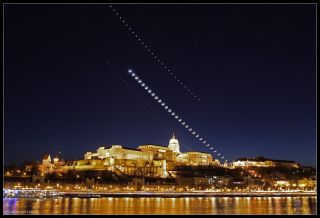 Jupiter, the moon and Venus align over Buda Castle in Budapest, Hungary on March 26, 2012.
(Image: © Tamas Ladanyi / the World at Night )

Jupiter, the moon and Venus align in the night sky over Buda Castle in this skywatcher's image. The three celestial objects formed what is called a conjunction in the sky. A conjunction occurs when two celestial bodies, Venus and Jupiter in this case, appear near each other.

Astrophotographer Tamas Ladanyi of the World at Night took this photo from Budapest, Hungary on March 26, 2012. The orbs look like an arrow in space, with the crescent moon closest to us, Venus on the top right and Jupiter below.

While the two planets have been moving into our view for some time, this is the best conjunction of Venus and Jupiter for a while, according to NASA astronomers. Jupiter, 535 million miles (861 million km) away, is moving further from the Earth’s view and will soon be overshadowed by the glare of the sun. Venus, 67 million miles (108 million km), is still easily visible and can appear as a bright, partially lit disk in small telescopes.