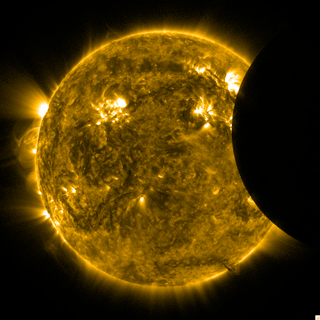 NASA's Solar Dynamics Observatory (SDO) was watching Tuesday morning when the new moon crossed part of the sun's face in a partial eclipse that was visible only from space. SDO snapped a video and photos of the solar eclipse from its lofty perch 22,000 miles (36,000 kilometers) above Earth.

"It's a PacMan sun! The moon is transiting between @NASA_SDO and the sun today!" SDO officials wrote Tuesday in a post to @Camilla_SDO, the mission's mascot Twitter account, referring to the circular video game hero that chows down on ghosts and dots.

The partial solar eclipse provided more than just pretty pictures, however. During its travels, the moon briefly blocked sunspot AR1422, an active region that is blasting strong ultraviolet emissions into space.

"This caused a dip in the EVE [extreme ultraviolet] output and may allow scientists to calibrate the energy emitted by the active region," SDO researchers wrote in a blog post Tuesday.

Solar eclipses occur when the moon is in its new phase and at a point in its orbit that is between Earth and the sun. When the moon aligns perfectly with the sun, as viewed from Earth, a total solar eclipse occurs, while at other times the sun is only partly obscured.

The next partial solar eclipse visible from Earth will occur May 20. Skywatchers in much of Asia, the Pacific and western North America will be able to see it, according to NASA officials.

A total solar eclipse will take place Nov. 13, but it will be visible only from parts of northern Australia and the South Pacific. However, skywatchers in much of Australia, New Zealand and southern South America will be able to see a partial eclipse on that day.

The $850 million SDO spacecraft, which launched in February 2010, is the first in a fleet of NASA efforts to study our sun.

The probe's five-year mission is the cornerstone of a NASA science program called Living with a Star, which aims to help researchers better understand aspects of the sun-Earth system that affect our lives and society.