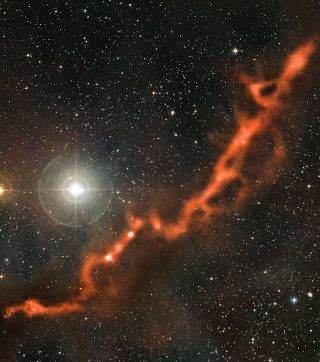 A European telescope has spotted a vast tendril of cosmic dust reaching across a dense cloud in deep space.

The huge, tentacle-like filament of dust is more than 10 light-years long and is anchored to the so-called Taurus molecular cloud, which is about 450 light-years from Earth in the constellation Taurus (the Bull). The cloud and filament are filled with newborn stars that are hidden from view by interstellar dust, according to an image description.

"In visible light, these regions appear as dark lanes, lacking in stars. Barnard correctly argued that this appearance was due to 'obscuring matter in space,'" ESO officials explained in a description accompanying the photo's release today (Feb. 15). "We know today that these dark markings are actually clouds of interstellar gas and dust grains. The dust grains — tiny particles similar to very fine soot and sand — absorb visible light, blocking our view of the rich star field behind the clouds."

In the new photo of the Taurus cloud filament, heat from the tendril's dust is shown in orange hues that are superimposed on top of a visible-light image. Filament region Barnard 211 is at the image's upper right, while Barnard 213 resides at lower left. [See photos and video of the space dust tentacle]

Two bright stars also stand out in the new image, but both are in the foreground and are thus closer to Earth than the Taurus molecular cloud.

The Taurus cloud appears extra dark when observed with visible-light telescopes because its dust is extremely cold, with an average temperature of around minus 441 Fahrenheit (minus 263 Celsius). The region can only be observed well at millimeter or submillimeter wavelengths, which are up to 1,000 times longer than those of visible light.

The $1.3 billion ALMA observatory will ultimately be a network of 66 telescopes, each the size of APEX, spread across 11 miles (18 kilometers) on Chile's Chajnantor plateau and perched at an elevation of about 16,500 feet (5,000 m). Last October, astronomers released the first image from the still-incomplete telescope array.