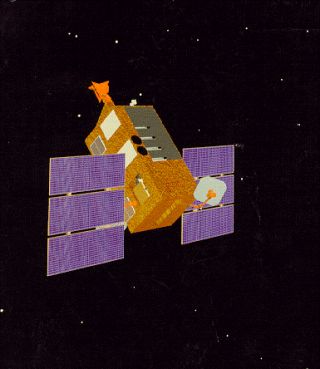 The Rossi X-ray Timing Explorer, a NASA satellite retired from service Jan. 5, will present a 1-in-1,000 chance of harming someone when it makes an uncontrolled fall from Earth orbit some time after 2014, a level ten times riskier than NASA now requires for re-entering spacecraft, according to an agency spokesperson.

The forecast for the satellite's re-entry calls for a return between 2014 and 2023. Fluctuations in solar activity cause the atmosphere to expand and contract, making it difficult to accurately predict when uncontrolled satellites will re-enter.

The satellite, launched in December 1995, was designed before NASA issued standards for public safety from re-entering spacecraft. NASA satellites must now have a probability of striking a person of less than 1-in-10,000.

"This satellite was launched four months before the first NASA standard on orbital debris mitigation and re-entry risk management was issued," said Beth Dickey, a spokesperson at NASA Headquarters in Washington. "As such, it was not subject to the re-entry risk guideline, since it had already been built."

NASA's Upper Atmospheric Research Satellite, or UARS, re-entered the atmosphere in September, spreading debris over the unpopulated Pacific Ocean. It carried a risk of 1-in-3,200 of a human casualty, but the event caused no injuries or damage.

"Later, NASA did evaluate the re-entry risk for RXTE and found it to be on the order of 1-in-1,000, or about ten times the maximum desired risk level," Dickey told Spaceflight Now.

Satellites with the risk of RXTE typically re-enter ever few years. No one has ever been reported hurt by falling satellite debris.

The RXTE spacecraft does not carry propellant, so leftover rocket fuel and tanks are not a concern, according to NASA officials.

Germany's ROSAT X-ray observatory uncontrollably crashed back into Earth's atmosphere in October with a 1-in-2,000 risk of harming a person. There were no reports of casualties from ROSAT's re-entry.

RXTE is circling 294 miles above Earth in an orbit that passes over regions between 23 degrees north and south latitude. When the 7,000-pound satellite falls from orbit, it will only threaten areas lying under its equatorial flight path.

During its 16-year mission, RXTE gave researchers glimpses of the inner workings of black holes and neutron stars.