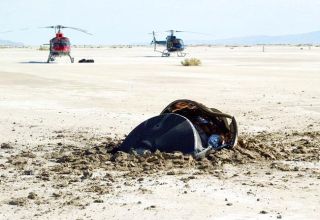 Itremains a resolute axiom of the space business: "Failure is not an option".However, there are a host of terrible tales of misfiring rockets, lost-to-spacesatellites and interplanetary probes gone awry.

Perhapsa more solid maxim is: "To err is human."

Foul-upsoccur--and often due to intense schedule pressure. Sometimes less money meansaccepting more risk by reduced testing of hardware. Failure is indeedfrustrating. It can be sparked by the littlest thing that turns into a bigsnafu.

Thechronicles of space exploration are littered with costly mistakes. Satellitesblow their fuses. Spacecraft shoot by their targets. Parachutes fail to unfold.Ground operators transmit a wrong command.

Whymishaps arise--many quite preventable--might seem a mystery until you put all thefact down. In the end, when the complexity of space missions is fullyappreciated, it seems more mysterious that anything ever flies.

Andthat's exactly the focus of a new book: Space SystemsFailures - Disasters and Rescues of Satellites, Rocket and Space Probes (Springer-PraxisBooks, 2005).

Thefact-filled volume has been written byDavid Harland, a British spacehistorian, along with Ralph Lorenz, aspace scientist at the University of Arizona's Lunar and Planetary Laboratory in Tucson, Arizona.

Thetrials and tribulations of exploration at the high frontier are many. Incompiling their book, Harland and Lorenz encountered a feeling "of growingsurprise that anything works at all!"

Forexample, following a string of failures--a Titan 4A booster, the loss of theMars Observer, a weather satellite, as well as a Landsat remote sensingspacecraft--a panel of experts in late 1993 that studied these catastrophicaccidents blamed "too much employee turnover, an unclear organizationalstructure, and a breakdown in accountability."

Inone other instance, a thermal wrap and tape were misapplied, preventing a cleanseparation of rocket stages. The result: Loss of an expensive Defense SupportProgram satellite.

Theauthors also note one incident involving a Titan 4 that had sat on the launchpad for over 1,000 days, with a frustrated Air Force commander threatening tomount a plaque on the booster that tallied the $3.5 million-per-day of delaybill for the U.S.taxpayer.

Japanese,European, as well as Chinese rocket woes are also detailed. Spotlighted is thecase in 1996 of China'sLong March 3B that toppled just seconds after liftoff. There were casualtiesand deaths when the rocket took its errant trajectory. That disaster was tracedto the deterioration of gold-aluminum wiring connections within the poweramplifier for a motor in the rocket's inertial measurement unit.

Siftingthrough spacecraft failure reports, Harland and Lorenz underscore the value ofredundancy--likening it to a human having a pair of kidneys, but able to live onjust one. Broadly speaking, the authors suggest that the number of failures isdecreasing, "and their significance is generally becoming less serious."

Still,there's the loss of Mars Observer in 1993, three days before it was to enterorbit around the red planet. Unable to conclusively identify a single cause ofthe failure, experts later observed the probe was using technology designed forEarth orbiting satellites, not for deep space. Braking engine hardware,therefore, was not suited to spending several months coasting through the harshenvironment of interplanetary space.

Oneclassic case of an unstable-in-space satellite design harkens back to America's firstsatellite lofted in 1958: Explorer 1. In the history books for revealing Earthhad a belt of trapped charged particles, the satellite suffered attitudeproblems, some tied to errors introduced during its construction.

Startracker breakdowns, gyro failures, balky batteries, clamps that were notremoved before flight, a screw pushed in too far--even contaminated lubricantsthat can give a spacecraft the jitters--all are part of a large laundry list ofitems that have plagued missions of various nations over the decades.

Ofcourse, Harland and Lorenz add that there is the "act of God" that can haunt aspacecraft too.

Solarstorms may threaten. A high-velocity speck of space dust might cause damage.You could also be knocked out by human-made debris. There are shieldingtechniques that help guard against such dangers. But sometimes, the authorspoint out, a satellite maker or operator may purposely declare acts of Godrather than fess up to malfeasance.

Arecent irksome reminder that even the smallest item can bring down a majorspace mission was the crash of NASA's Genesis returncapsule. It slammed into the Utahdesert last September. The craft's science canister was badly beat up and solarsamples spoiled when parachutes did not open.

Itwas later discovered that tiny but critical G-switches on the return capsule --designed to monitor deceleration forces during the plunge through Earth'satmosphere -- were installed the wrong way around. That being the case, thedevices were unable to set into action small explosive charges to toss out aset of parachutes.

Bad day at the shop

Considerthe take-your-breath away view of a $233 million satellite spilling to thefloor. Unbeknownst to technicians working on the spacecraft in 2003, criticalbolts securing the nearly two-ton weather spacecraft to its work platform hadbeen removed for another project.

Talkabout your bad day at the shop. The damage added up to $135 million in repaircosts.

Arguably,one of the most bizarre bungles was chalked up during the Russian Venera 13 mission to Venus in 1982. The craftsuccessfully touched down on the hellish landscape. But when a camera lens capwas ejected to image the local terrain, it came to rest at exactly the spotwhere a sampling arm swung down.

Datarelayed by the Venera lander's arm-mounted science gear dutifully reported onthe makeup of the discarded lens cap, rather than the Venusian surface!

Forthe book, Lorenz told SPACE.com thathe had considered an alternative title, more on the lines of: "A Million Ways to Fail."

Someslip-ups in space are being made over and over again, Lorenz observed,particularly mistakes involving the polarity of magnetometers - an instrument for measuring the magnitude and direction of amagnetic field.

"Researchingthe book brought it home just how many things have to go exactly right for amission to succeed," Lorenz said. He admitted that it's a realization that issomething he tries not to think about day-to-day..."otherwise I'd go quite mad."

Lorenzsaid that a hopeful outcome from reading the book is that people may thinktwice before dismissing a failure mode as "improbable."

"Thecraziest things do happen," Lorenz emphasized. "Failures are not going to goaway," he said, adding that there is a "certain inevitability" when spacesystems are almost all "one-offs" that are done under time and budget pressurein sometimes uncertain operating environments.

Inputting the book together, there were some surprises, Harland suggested, notingthat he's a writer, not an aerospace engineer. "SoI don't build or operate hardware. I brought an outsider's perspective," hesaid.

"Onething that struck me was the determination of engineers to rescue their ailingspacecraft...a little like medics trying to save their patient," Harland told SPACE.com. Or to put it another way, headded, in writing the book it "brought into focus the deep sense of loss thatengineers suffer when they lose one."

Harlandsaid while there are many "lessons learned" messages, some go unheeded--even thosefrom as far back as the Apollo program.

"Thelesson that I don't think has been learned yet--speaking as a non-engineer-- iswhat Apollo flight controllers asked potential hardware suppliers after thesalesperson explained how their gizmo worked: 'How does it fail?'".