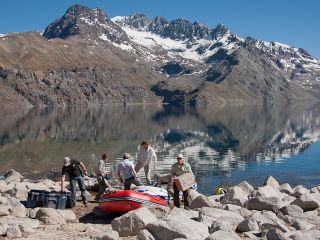 A team of scientists has traveled to remote Laguna Negra in the central Andes of Chile to test technologies that could one day be used to explore the hydrocarbon lakes of Saturn's moon Titan.

The Planetary Lake Lander (PLL) project is led by Principal Investigator Nathalie Cabrol of the NASA Ames Research Center and the SETI Institute, and is funded by the NASA Astrobiology Science and Technology for Exploring Planets (ASTEP) program. This three-year field campaign will design and deploy a lake lander at Laguna Negra, which is a particularly vulnerable system where ice is melting at an accelerated rate.

In addition to preparing us for Titan, the study will also help answer questions about how deglaciation affects lifein glacial lakes. During the 2011 field campaign, Astrobiology Magazine's Expeditions Editor, Henry Bortman, is providing a first-hand account of the team's work through blogs and images.

After assembling Sunday night at a hotel in Santiago, Chile, the first group of Planetary Lake Landers (PLLers) began their journey to Laguna Negra Monday morning. The most arduous part of the trip was getting out of the hotel parking lot into rush-hour traffic.

An hour later, still within the confines of Santiago, we pulled into the offices of Aguas Andina, the private company responsible for Santiago’s water supply. Santiago’s water historically comes from Laguna Negra, which is fed by the Echaurren glacier at the north end of the lake. [Photos: Stunning Lakes]

Because the surrounding land is under Aguas Andinas control, we needed their permission to camp and do research there. At our meeting, we explained the goals of the Planetary Lake Lander project. They shared historical data about the glacier and the lake with us, and we promised to share whatever data we collected with them.

The Echaurren glacier is melting, rapidly. Within 50 years, it is expected to be gone completely. In the recent past, the level of Laguna Negra has dropped several meters from its historical average over the past century and a half, threatening the water supply for a city of six million people.

Keys in hand to the various locked gates along the gravel road that leads to the lake, we continued on our journey. The plan was to get to the lake and set up camp in one day.

But in field research, plans have a way of changing. After a several-hour-long delay in San Gabriel, a small rural Chilean town (fortunately not too small to have both empanadas and beer for sale), we met up with additional members of our team, and began a steep climb up into the Andes. We spent the night at an Aguas Andinas refuge about an hour’s drive from the lake.

The next morning, we got our first view of the lake, from a small parking area where the road to Laguna Negra ends. Then began the unpleasant task of carrying camping gear, personal gear, and dozens of hard plastic cases full of scientific equipment down a rocky, winding, quarter-mile dirt path from the parking lot to our campsite. Everything didn’t make it to the campsite that first day — more on that later — but at least we all spent the night in the tents that would be our home for the next three weeks.

Two days after we arrived at Laguna Negra, we were still lugging in equipment. At first, we carried it down the trail from the parking lot to our camp on our backs or in our hands. But there was so much equipment, some of it quite heavy, that it soon became clear we wouldn’t be able to carry everything that way.

The solution: mules. And a pair of ferryboats. Mules did much of the heavy lifting. For two days they hauled large, heavy bins and boxes, making several trips a day.

But even the mules couldn’t carry everything. Some items were too bulky or too fragile to withstand the rough treatment mule transport would have subjected them to. So they were ported by truck to Launch Point, several hundred yards down the shore of the lake from our campsite. From there they were ferried in small inflatable motorboats to the Landing, closer to camp. (Actually, only one boat had a motor; it towed the other boat behind it, flotilla-style.)

The boats’ intended purpose was to enable scientists to access distant parts of the lakeshore and to deploy scientific instruments in the water. But before research could begin, the scientific equipment had to make its way to camp, so before graduating to the status of research vessels, they were first pressed into service as “water mules.”

In all, more than one and a half tons of equipment and supplies were brought to the encampment, and for two days the place had the feverish feel of a construction site.

The Comedor is our dining hall and meeting room. (Before this dome was built, everyone squeezed in the kitchen to eat.) The Bio Dome is a biology field lab, where despite the relentlessly blowing dust, sophisticated sample-preparation procedures requiring near-clean-room conditions are carried out. The XQM Studio is the staging area for an international video crew covering the Planetary Lake Lander project. And finally, the Robo Dome, where the geeks hang out, is the communications and data-processing hub for the group and the operational center for the project’s robot. (More on the robot in later posts.) [Photos: Cutting-Edge Robots]

Then there was the electrical and communications infrastructure. Nearly 300 feet (91 m) of orange heavy-duty electrical cable had to be wired and strung to bring power from a pair of generators to the four domes and the kitchen. And satellite phones and Internet and Wi-Fi hubs had to be installed and tested, to enable the remote camp to share data internally and communicate with the outside world.

The rumored bathroom and solar shower were still nowhere to be seen, but PLL Base Camp finally had progressed to the point to where science — the reason we came here — could begin.

Quote of the day: “But now they’ll know who did it.”