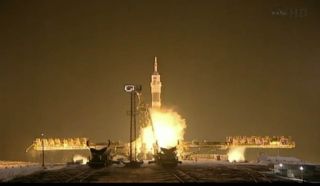 Three spaceflyers blasted off today (Dec. 21) from snowy Kazakhstan to spend the holidays on the International Space Station.

The trio is bound for the space station, where they are scheduled to dock on Friday (Dec. 23) at 10:22 a.m. EST (1522 GMT). They are set to begin a roughly five-month stay on the orbiting outpost as part of the station's Expedition 30 mission, and will return in May 2012.

Pettit, Kononenko and Kuipers will join the three spaceflyers already on the station: commander Daniel Burbank of NASA and flight engineers Anton Shkaplerov and Anatoly Ivanishin of Russia. Their arrival will beef up the station's crew complement to its full six members.

The new arrivals will find the space laboratory festive for the holidays. The current crew has put up holiday decorations to mark the season, and Burbank sent a holiday greeting video down to the people of Earth. [Space Station Commander Sends Holiday Greetings to Earth]

"We'll celebrate the holidays in great fashion after they get here," Burbank said of the new crewmembers. "We've already put up decorations, and we've gathered together all the cards and gifts that our friends and families have sent to us, and we're planning a couple of big meals. That'll be great."

Pettit, Kononenko and Kuipers, each veteran spaceflyers who've been to the space station before, will also have their work cut out for them once they arrive at their new home-away-from-home. In addition to wide-ranging scientific research projects, the crewmembers will spend their time keeping up the station and fixing anything that might break.

The presence of six crewmembers onboard the station will allow each spaceflyer to dig deep into research.

"I think I have something like 57 experiments from NASA, from ESA and also from JAXA," the Japan Aerospace Exploration Agency, Kuipers said in a press conference earlier this year. "There's a whole bunch of experiments that I'm looking forward to, experiments in different fields — fluid physiology, fluid physics."

The Expedition 30 team is also scheduled to be in space for a milestone event coming up.

On Feb. 7, the first commercial spacecraft to visit the International Space Station is set to launch. The SpaceX Dragon capsule will be making its first cargo delivery run as part of a NASA program to encourage the development of private spacecraft to help fill the gap left by the retirement of the space shuttles this summer.

The unmanned Dragon is due to launch on SpaceX's Falcon 9 rocket, and make an autonomous rendezvous with the space station. Once within reach, the crew inside the station will grab onto the freighter will the station's robotic arm and berth it on the lab.

"We've been practicing the dynamics of how you do that and we practice that a lot," Pettit said. "Once you get these docked to station, it's pretty much standard operations."

After about three months in space, the Expedition 30 mission will change over to Expedition 31, and Kononenko will take over command of the station. There will be many differences for him between this trip and his previous sojourn to the orbiting lab in 2008, including a potential for two spacewalks (or extravehicular activities, also known as EVAs) in 2012.

"A lot of things changed for me," Kononenko told SPACE.com in a prelaunch interview. "First I'm going to fly to the station as a Soyuz commander and later become comrade of the International Space Station – that's a really big transition for me. The station itself became more interesting over these couple years, new modules appeared, new systems were installed. Of course the EVA I'm going to perform has new tasks and new objectives and I'm looking forward to them."

The launch comes at the end of a tough year for Russia's space agency.

Today's launch was delayed by about a month in the wake of a failed Russian cargo ship launch in August atop a rocket similar to the Soyuz that lifted off today. Russian spacecraft were grounded while officials investigated the problem, which was eventually traced back to a malfunctioning gas generator in the Soyuz’s third stage engine.

At the end of October, Russia successfully launched another cargo vehicle, and on Nov. 14, Burbank, Shkaplerov and Ivanishin launched safely to the station atop a Soyuz rocket.

Russia also suffered the loss of its unmanned Phobos-Grunt probe, which lifted off Nov. 8 to collect samples from Mars' moon Phobos. However, the vehicle failed to fire its thrusters toward Mars, and has been stranded, and largely unresponsive, in Earth orbit. Experts expect it to fall back to Earth as a piece of space debris in January.

Phobos-Grunt was the 19th spacecraft Russia has launched toward Mars since 1960. None of them have been fully successful.