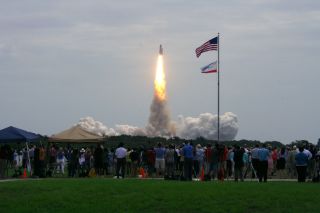 Spectators in the foreground watch as Atlantis launches on its final flight, July 8, 2011.
(Image: © Roger Guillemette for SPACE.com)

This year was quite an eventful one in spaceflight, with many vessels launching toward the heavens — and a few crashing back to Earth.

Here's a rundown of the top 11 spaceflight stories of 2011, from the last mission of NASA's venerable space shuttle program to China's first-ever docking of two spaceships in Earth orbit:

1. Satellites falling from the sky

The sky wasn't really falling in autumn 2011; it just seemed that way, with two defunct satellites plummeting to Earth out of control within a month of each other.

First came NASA's Upper Atmosphere Research Satellite, or UARS. This 6.5-ton climate satellite, which was about the size of a school bus, launched in 1991 and was decommissioned in 2005. UARS then spent six years spiraling slowly toward our planet, finally plunging into the atmosphere above the Pacific Ocean Sept. 24.

Germany's 2.7-ton Roentgen Satellite, or ROSAT, followed closely on UARS' heels. This craft, which launched in 1990 to survey the heavens in X-rays and was shut down in 1999, fell back to Earth over the Indian Ocean Oct. 23.

Neither satellite crash injured anyone. But the sky isn't done raining down huge pieces of space junk. Russia's failed Mars probe Phobos-Grunt will soon plummet to Earth, perhaps even before the year is out (see below). [Vote for the Best Spaceflight Story of 2011]

2. The end of the space shuttle era

This year also saw the last flight of an American icon. NASA's storied space shuttle program came to an end after 30 years of service when Atlantis touched down shortly before dawn July 21.

Atlantis' flight was the 135th space mission for the shuttle program, which began to take shape in 1972 and first launched to orbit in 1981. The shuttle accomplished a great deal during its long lifetime, helping to build the International Space Station and making spaceflight more routine than it had been.

However, the shuttle's record highlights that spaceflight remains a dangerous endeavor. Two of its 135 missions ended in tragedy, killing a total of 14 astronauts. The shuttle Challenger exploded shortly after liftoff in 1986, while Columbia broke up during re-entry in 2003. [NASA's Space Shuttle Program in Pictures: A Tribute]

The three remaining space-flown orbiters are now being prepped for display in museums. For now, NASA is dependent on Russian Soyuz vehicles to ferry its astronauts to and from low-Earth orbit. However, the agency hopes private companies can take over this orbital taxi service by 2017 or so.

3. A space first for China

Nov. 2 was a banner day for China and its space program. On that date, the nation successfully docked two robotic spacecraft in low-Earth orbit for the first time ever.

The mating of the two vehicles — called Shenzhou 8 and Tiangong 1 — was designed to test key technologies that China will use to assemble a space station in orbit. The country hopes to have a 66-ton manned station up and running by 2020.

And China won't rest on its laurels for long. The nation plans to launch two more docking missions during 2012, at least one of which will be manned.

The space shuttle program celebrated 30 years of spaceflight in 2011, but that anniversary took a back seat to a much bigger one this year: 50 years of human spaceflight.

And the anniversaries didn't stop there. On May 25, 1961, President John F. Kennedy made the speech that charted NASA's direction for years to come, announcing that the United States would put an astronaut on the moon before the end of the decade.

So while our future may be in the stars, this year spurred many spaceflight experts and observers to cast their gaze back through history.

5. The astronaut and the congresswoman

On Jan. 8, a gunman shot Arizona congresswoman Gabrielle Giffords in the head as she talked to constituents outside a Tucson grocery store. The attack left Giffords gravely wounded and six other people dead.

The tragedy reverberated beyond Arizona and the halls of Congress, reaching into low-Earth orbit. Giffords' husband, Mark Kelly, was slated to command the STS-134 mission of the space shuttle Endeavour — the second-to-last flight of the shuttle program — just a few months after the shooting.

As Giffords made strides in her recovery, Kelly decided to take part in the mission. When Endeavour blasted off from Florida's Kennedy Space Center May 16, Giffords was in the crowd.

Kelly retired in October with four spaceflights under his belt. Giffords continues to recuperate, and she's said she may consider a return to Congress if her condition improves enough.

In many ways, NASA had a great year in 2011. The agency launched three different planetary missions, rendezvoused with the huge asteroid Vesta and executed a comet flyby. And NASA's Kepler space telescope discovered more than 2,000 potential alien planets.

But the year also brought its share of transition and uncertainty. With the space shuttle fleet retired, NASA is now completely dependent on Russian Soyuz vehicles to ferry its astronauts to and from the International Space Station, at $63 million per seat. NASA wants American private spaceflight companies to take over this taxi service soon, but that probably won't happen until 2017 at the earliest, officials have said.

NASA's budget also keeps getting trimmed, as lawmakers look to cut federal spending across the board. The agency may get just $17.4 billion in fiscal year 2012, down from $18.5 billion in 2011.

The belt-tightening could threaten some of the agency's most ambitious and expensive projects, including the $8.8-billion James Webb Space Telescope (JWST). In July, the House Appropriations Committee recommended canceling the huge instrument, which is billed as the muscular successor to NASA's Hubble Space Telescope.

Congress later restored funding for JWST, marking it as safe — for now. The telescope is slated to launch in October 2018.

In 2010, President Barack Obama instructed NASA to work toward getting astronauts to an asteroid by 2025 and to Mars by the mid-2030s. This year, the space agency laid out how it plans to reach these deep-space destinations.

The astronauts will ride aboard a new spaceship called the Orion Multi-Purpose Crew Vehicle, which NASA announced in May. The spacecraft is based heavily on the old Orion capsule concept, which NASA began developing as part of its moon-oriented Constellation program. The Obama Administration cancelled Constellation last year in favor of the asteroid-first plan.

In September, NASA revealed its Space Launch System (SLS), the $10-billion giant rocket that will lift Orion off the pad. In its early incarnations, the SLS will likely be capable of lofting 70 tons of payload, but NASA eventually wants to beef it up to carry 130 tons of material to space.

NASA hopes the Orion-SLS combo will be launching astronauts toward deep space by 2021.

2011 was a tough year for Russian spaceflight, as a string of high-profile mishaps plagued the country.

On Feb. 1, for example, a Rockot launch vehicle failed to deliver an Earth-observing satellite to the proper orbit. And on Aug. 18, a Proton rocket didn't place a $300-million communications satellite in the desired orbit.

Then, on Aug. 24, the unmanned Progress 44 supply ship crashed while hauling cargo to the International Space Station, doomed by a problem with the third stage of its Soyuz rocket. Russia uses a similar version of the Soyuz to launch astronauts to the space station, so manned flights were put on hold until the problem with the rocket could be identified and fixed. As a result, the orbiting lab operated with a skeleton crew of three astronauts for a stretch this autumn.

Finally, the $165-million Mars moon probe Phobos-Grunt got stuck in Earth orbit shortly after its Nov. 8 launch. The spacecraft's thrusters were supposed to fire to send it on a course for the Red Planet, but they never did so.

Phobos-Grunt is still circling our planet, its orbit getting lower and lower by the day. Most experts consider the probe lost, predicting that it will come crashing back into the atmosphere in mid-January, though it's tough to peg an exact date. [Photos: Russia's Failed Phobos-Grunt Mission]

Russian President Dmitry Medvedev recently threatened heavy fines or even criminal punishment for the people responsible for this series of embarrassing failures.

After 13 years of construction work, the International Space Station finally reached a measure of completeness in 2011.

In March, the space shuttle Discovery delivered NASA's final contribution to the assembly of the orbiting lab, a new room called the Permanent Multipurpose Module. While Russia may attach one more module in the coming years, construction from a U.S. standpoint is now 100-percent done.

NASA and its international partners began building the orbiting lab in 1998. The 431-ton space station is as big as a football field and has about as much living space as a five-bedroom house. With an estimated price tag of $100 billion, the orbital outpost is the most expensive structure ever built.

NASA launched its own Mars mission Nov. 26, less than three weeks after Russia's left the pad. But unlike Phobos-Grunt, the $2.5-billion Mars Science Laboratory (MSL) mission is speeding toward the Red Planet, apparently in perfect health.

MSL will drop the car-size Curiosity rover at Mars' huge Gale Crater in August 2012, using a rocket-powered sky crane to lower the robot to the planet's surface. Curiosity's main task is to assess whether the Gale Crater area is, or ever was, capable of supporting microbial life. [Photos: NASA's Curiosity Rover Launches to Mars]

The 1-ton rover carries 10 instruments to help it answer this question, including a rock-zapping laser and equipment designed to identify organic compounds — carbon-based molecules that are the building blocks of life as we know it.

A private space race is developing among companies that hope to ferry NASA astronauts to and from low-Earth orbit in the post-shuttle era, and 2011 saw that race heat up.

Several different companies made strides this year in their spacecraft development, ticking off key milestones that NASA laid out for them as a condition of continued funding. The chief contenders — firms such as Blue Origin, SpaceX, Boeing and Sierra Nevada — generally say they should be ready to fly by 2015 or 2016.

Private suborbital spaceflight also made progress this year. The space tourism company Virgin Galactic conducted more glide tests of its SpaceShipTwo vehicle, and company officials have said that in-vehicle rocket tests should start in the first half of 2012.

During commercial operations, SpaceShipTwo will take off from Spaceport America, and this commercial facility really began taking shape in 2011. Further, scientists put money down on the research potential of suborbital spaceflight this year, buying seats on SpaceShipTwo and XCOR Aerospace's Lynx vehicle.