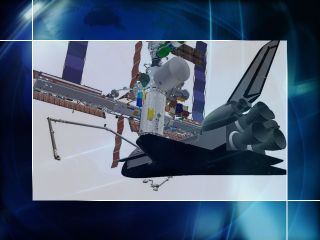 HOUSTON--While STS-114spacewalker Stephen Robinson will be working alone during a one-manrepair job underneath the shuttle Discovery Wednesday, he will not be outof sight or the minds of his fellow crewmates and flight controllers, theastronauts and shuttle officials said today.

Aspart of a planned extravehicularactivity (EVA) tomorrow, Robinson is expected to board the end of a longrobotic arm and remove two strips of ceramic fiber cloth--known asgap-filler--jutting out from between the fragile heat-resistant tiles alongDiscovery's belly. The repair is scheduled to take place at about 7:30 a.m. EDT(1130 GMT), three hours and 20 minutes into the early morning spacewalk,shuttle officials said.

Duringthe fix, Robinson's fellow Discovery astronauts will track his movements viarobot-arm mounted cameras radio while his spacewalking partner Soichi Noguchi, of the Japanese Aerospace ExplorationAgency (JAXA), will keep close watch on the operation from a vantage pointoutside the ISS.

"He'sthere to give us another set of eyes and also serve as relay [forcommunications] if needed," said Kelly Beck, flight director of NASA's TigerTeam assigned to hammer out procedures for changes in Discovery's flight plan,during a mission status report here at Johnson Space Center (JSC).

Shuttleofficials decided Monday to press forward with the spacewalk repair to clearany concerns with Discovery's vital heat shield. The protruding gap-fillerscould disrupt the aerodynamics of Discovery's reentry planned for Aug. 8,forcing the air around the orbiter to shift from the smooth laminar flow into aturbulent mix a bit earlier in the descent, while it flies at Mach 21 asopposed to Mach 18 or so, that could cause increase heating to its tile surfaceand wing leading edges, they said then.

Duringthe repair, Robinson will stand atop the robotic arm attached to the InternationalSpace Station (ISS), while Discovery's crew maneuvers the shuttle's robotic arm- capped with an orbital boom extension to make a 100-foot crane - to watchwith its own camera.

"They'renot used to reaching down around the bottom of the orbiter," said Paul Hill,STS-114's lead shuttle flight director, of ISS arm controllers for thefirst-time repair job. "That's a little bit of a new touch."

Spacewalkplanners are unsure whether Robinson helmet mounted camera will be able tobroadcast images of the fix as the astronaut first uses his right hand to pullout the gap-fillers, and then a saw to cut them off if they don't budge.

Discoveryastronauts and flight controllers agree that the removal technique for thegap-fillers, a simple tugging motion by hand, is relatively simple, but theyare concerned about potentially damaging the shuttle's tile-lined belly.

"Wemay get a little closer than a foot [from the tile], but when we do we'll havevery good visibility and we'll be moving very slowly," said astronaut DavidWolf, head of the EVA branch of NASA's Astronaut Office. "We don't like gettingclose to the tile, [it] is a delicate instrument ofthe shuttle."

Robinsonwill take care not to bump his helmet, the most probably point of impact, onthe shuttle's vulnerable tiles, Wolf added.

Spacewalkofficials are confident that should a gentle touch or slip from Robinson'ssecondary tool - the modified hack saw - does cause tile damage, it will berelatively minor. But just in case, Robinson and Noguchi will preposition atile repair method they tested in an earlier spacewalk - an emittancewash applicator that coats chipped tiles to increase heat shedding - justoutside the shuttle airlock, which could be applied to any damage caused,shuttle officials said.

"Whenwe went to look at this, we had difficulty even inducing intentional tiledamage with the saw," Wolf said. "And you'd be able to detect when you'rehitting the orbiter will before you do a critical damage."