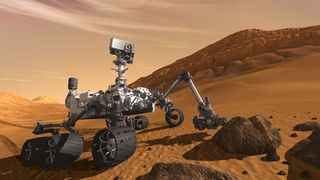 NASA’s Mars Science Laboratory is slated to launch this Saturday (Nov. 26) from the Cape Canaveral Air Force Base in Florida, and like all other rocket launches, there is a chance of failure.

Unlike previous Mars mission launches, an accident during NASA’s upcoming liftoff poses an additional risk: the spread of radioactive plutonium, which is used to power the new rover, Curiosity. Some people are concerned that an explosion during launch, and the possible release of plutonium, would harm them. But should they really be worried?

Probably not — a launch accident poses little radiation danger to people, according to NASA.

The first thing to remember is that there is a very small probability that an accident will happen. Based on analyses of the planned launch and reviews of previous expendable rocket launches, NASA, the U.S. Department of Energy and external experts have determined that there is a 96.7 percent chance that the launch will be successful and the rocket will escape from Earth. This leaves a 3.3 percent chance that an accident will happen, but the probability of plutonium actually being released during an accident is almost 10 times less than that.

The low radiation danger is due to the layered, protective module that NASA and others have built to contain the plutonium fuel. “Every part of the module is designed to protect the fuel under various circumstances,” said Ryan Bechtel, who oversees safety analysis tests for the Department of Energy’s Office of Space and Defense Power Systems.

At the Los Alamos National Laboratory in New Mexico, scientists begin their protective procedures by placing the plutonium fuel into four large pellets, which they then clad in iridium, the second densest element known to man. Iridium, Bechtel notes, is both strong and pliable. “It bends but does not break,” he told Life’s Little Mysteries. The iridium cladding, which has a melting point greater than 2,000 degrees Celsius (3,632 Fahrenheit), not only protects the radioactive fuel from impact damage, but also from heat generated from fires or a return trip through Earth’s atmosphere. [Mars Mission May Be Curtain Call for Plutonium-Powered Spacecraft]

After the initial encapsulation, the scientists send the fuel pellets over to colleagues at the Idaho National Laboratory, who then build the rest of the module.

First, the scientists divide the iridium-clad pellets into two pairs, and then put the pairs into enclosures called graphite impact shells, or GIS. The GIS are “about the size of a salt shaker” and provide impact resistance, said Steve Johnson, director of the Space Nuclear Systems and Technology Division at the Idaho lab.

Next, the scientists add further heat protection by wrapping the two GIS in insulating sleeves made of a thin fiber called carbon bonded carbon. From here, the shells go together into a hardy, monolithic block called an aeroshell. It takes 10 hours to fully assemble the parts, which together make up a “general purpose heat source module,” Johnson said.

Bechtel and his colleagues have conducted a variety of tests to make sure that the module can fully protect the plutonium from impact and heat. One test involved shooting the module with titanium projectiles. “The graphitic material of the module slowed the projectiles and there was minimum damage (denting) to the iridium cladding,” Bechtel said.

A safer form of plutonium

In the unlikely event that plutonium escapes in a launch accident, it probably still would not be very harmful because the fuel is in a form called plutonium dioxide, which provides a couple of benefits over other forms.

One advantage of plutonium dioxide is that it’s very similar to ceramic. “If you break a ceramic dish, it tends to break into large pieces that will stay in the immediate accident area,” Bechtel said. A second, equally important benefit of using plutonium dioxide is that it’s insoluble. If the plutonium fuel gets vaporized (by the atmosphere or fire) and you inhale or swallow it, it will pass through your body quickly, rather than sticking around to cause significant radiation damage.

For those people who are exposed to the plutonium fuel during launch, they would receive 5 to 10 millirem of radiation over a 50-year period, according to Bechtel, who adds that people receive 5 millirem of radiation from each dental X-ray they get. This amount is also equal to what you receive each week from background radiation, NASA points out on its website. [How Do You Measure Radiation Exposure?]

Despite the apparent low radiation risk from the mission launch, NASA, the State of Florida and other federal and local agencies around Kennedy Space Center are making preparations to respond to any launch accident. These precautionary measures will include alerts to direct people to shelters if necessary.

“With any kind of rocket accident, there is some toxic plume,” Bechtel said. Avoiding the toxic danger could be as simple going indoors, closing the windows, turning off the air conditioner and waiting for the plume to pass. “This reduces the intake of any radioactive materials,” he said.

This story was provided by Life's Little Mysteries, a sister site to SPACE.com.