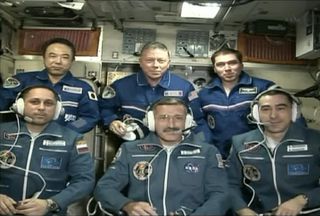 The three spaceflyers onboard the International Space Station may have to take shelter inside Russian space capsules tomorrow (Nov. 23), to protect themselves from a possible collision with a piece of Chinese space junk.

At 2:06 p.m. EST this afternoon (1906 GMT), Mission Control, at NASA's Johnson Space Center in Houston, informed the station crew —commander Dan Burbank of NASA and Russian flight engineers Anton Shkaplerov and Anatoly Ivanishin — that a piece of shrapnel from a Chinese weather satellite that was destroyed in 2007 looked to be on a course near the orbiting laboratory that comes a little too close for comfort.

The object, which is about 4 inches (10 centimeters) in diameter, may come within 2,800 feet (850 meters) of the station early tomorrow morning, according to the latest predictions. The agency refers to these close shaves as "conjunctions."

"The tracking at that time was showing it as going to be in the danger area," NASA spokesman Kelly Humphries told SPACE.com. "Since then tracking looks like it's trending to the better."

Mission Control won't decide whether the crewmembers actually need to board their space capsules until about half an hour before the potential conjunction time, which would be 4:30 a.m. EST (0930 GMT) tomorrow morning, at which point better tracking data should be available.

"We are going to wait until a little bit closer and see how the tracking continues to trend," Humphries said.

The potential conjunction makes for a chaotic start for the three space station crewmembers, who only arrived at the lab Nov. 16 to begin their months-long mission.

If space junk is on track to fly within a predetermined pizza box-shaped zone around the space station, NASA and its partners will direct the crew to seek shelter aboard their Soyuz spacecraft, which are continually docked at the outpost, in case they need to make a speedy escape. [Worst Space Debris Events of All Time]

The last time spaceflyers had to make such a maneuver was on June 28, 2011, when a piece of unknown space debris came within 850 feet (260 meters) of the space station. That was only the second time in history that the station crew has had to take shelter from space debris.

But space junk is a growing problem. Spent rocket stages, lost spacewalking tools, broken satellites and pieces of destroyed satellites are all clogging the orbital corridors of space. There is so much trash up there, in fact, that even if no more were added, it will collide with itself to continually produce more and more, scientists say.

Certain events, such as the 2007 event when China intentionally destroyed a defunct weather spacecraft in an anti-satellite test, have contributed greatly to the total amount of space debris.

Even though most pieces of space junk are much smaller than the football field-size space station, if an object traveling at 17,000 miles per hour (28,000 km per hour) collided with the outpost, it could do devastating damage.