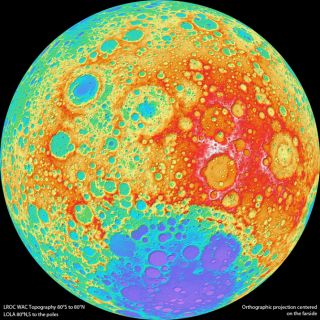 Scientists have stitched together the highest-resolution topographic map of the moon ever created, using observations made by NASA's Lunar Reconnaissance Orbiter (LRO) spacecraft.

The new lunar map covers 98.2 percent of the moon and depicts the natural satellite's surface and features at a pixel scale of about 330 feet (100 meters). A global view of Earth's nearest neighbor at such high resolution had never existed before, scientists said.

"Our new topographic view of the moon provides the dataset that lunar scientists have waited for since the Apollo era," said Mark Robinson of Arizona State University, principal investigator of the Lunar Reconnaissance Orbiter Camera (LROC), in a statement Thursday (Nov. 17).

"We can now determine slopes of all major geologic terrains on the moon at 100-meter scale, determine how the crust has deformed, better understand impact crater mechanics, investigate the nature of volcanic features and better plan future robotic and human missions to the moon," Robinson added.

The new map was created using thousands of pictures acquired by the Wide Angle Camera, part of the LROC imaging system. The Wide Angle Camera maps nearly the entire moon every month from LRO's average altitude of 30 miles (50 kilometers), building up a record of how the lunar surface looks under varying lighting conditions.

NASA launched the Lunar Reconnaissance Orbiter in 2009 on a $504 million mission to map the moon in unprecedented detail. The spacecraft is about the size of a Mini Cooper car and carries seven instruments to study the lunar surface.

In addition to its mapping role, the spacecraft has also spotted several historic artifacts of moon exploration, including NASA's Apollo landers and the boot prints left behind by moon-walking astronauts during the six manned lunar landings between 1969 and 1972.

The new moon map from the Lunar Reconnaissance Orbiter doesn’t cover 100 percent of the moon because persistent shadows prevent the camera from snapping good photos near the north and south poles. However, another instrument aboard LRO, the Lunar Orbiter Laser Altimeter, can map out polar terrain, so the "holes at the poles" may soon be filled in. [Photos: Our Changing Moon]

But even with the small polar blank spots, the new map is still plenty exciting, researchers said.

"I could not be more pleased with the quality of the map – it’s phenomenal!" Robinson said. "The richness of detail should inspire lunar geologists around the world for years to come."