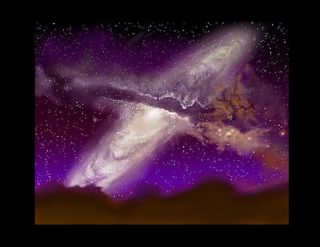 An artist's rendition of the collision between the Milky Way and the Andromeda galaxy. The results, however, may be more atypical than previously expected.
(Image: © James Gitlin)

Our Milky Way galaxy and its neighbor, the Andromeda galaxy, seem to be going through a midlife crisis.

New research reveals that both galaxies are in the middle of transitioning from young, star-forming regions into older, stagnant ones, a transition that is revealed by the galaxies' color. Generally, such a change comes after two galaxies collide, astronomers said, but this pair seems to be making the shift on its own.

In galaxies, star formation rates and color are closely related. But, analyses of the shade of the Milky Way are surprisingly rare.

A team of Australian astronomers, led by Simon Mutch, of the Swinburne University of Technology in Melbourne, sought to determine the color the Milky Way and the nearby spiral Andromeda galaxy. [Stunning Photos of Galaxy Collisions]

Too young to feel this old

Instead of the young, active signs they expected, the astronomers determined that both galaxies are not the typical blue or red color, but instead, fall in an in-between state of green.

Scientists have long regarded the Milky Way as a "typical" spiral galaxy, but in regards to color, the galaxy doesn't quite follow the standard model.

"Green galaxies are commonly thought to represent galaxies which are undergoing the transition from being young, dynamic, energetic, star-forming blue galaxies to being old, lethargic red galaxies," Mutch told SPACE.com in an email interview.

"In terms of a human being, this transitional phase could be thought of being akin to a midlife crisis."

Astronomers can't figure out the color of the Milky Way easily by examining it from the inside, because the position of the sun within the galaxy makes it a challenge.

"Determining the state of our own galaxy, while we're stuck inside it, is very difficult to do," Mutch said. "The phrase 'hard to see the forest for the trees' rings true here. When we look at the galaxy, much of it is obscured from our view by intervening gas and dust."

Viewing the Milky Way from the outside

To peek inside, Mutch and his team studied the mass of stars, the rate of star formation and the brightness and color of the stars within the two galaxies. These measurements provide a snapshot of the galactic pair.

The astronomers then modeled how galaxies grow, selecting an evolutionary track that fulfilled several of the properties of the Milky Way and Andromeda galaxies today.

Now, instead of looking at the galaxy from the inside, the team was able to get a glimpse from the outside instead, which gave them a clear view of the color.

Star formation dominates in blue galaxies, where the glow of young stars gives a galaxy its shine. As the stars die, they explode in supernova blasts that distribute gas throughout the galaxy, which is then recycled into newborn stars.

But galaxies aren't sitting quietly; they are constantly moving in the expanding universe. When galaxies collide, gas flows into the black hole at the newly merged center.

The resulting active galactic nucleus, or AGN, is among the brightest radio signals in the universe, and can be seen across great distances. Because it consumes the gas that baby stars need, the AGN slows star formation, and the galaxy loses its blue hue and gradually shifts to red, the astronomers said.

What caused the midlife crisis?

But the Milky Way and the Andromeda galaxy are shifting from blue to red without a collision, which was a surprising discovery, the researchers explained.

Since they are already slowing down, when they crash into each other in the future, the collision most likely won't generate a new powerhouse.

"Our finding that both the Milky Way and Andromeda are green suggests that there will be little cold gas left in both these galaxies when they merge sometime in the next 5 billion years or so," Mutch said. "They will likely be unable to produce an AGN."

So, why is the Milky Way running out of dust? Mutch isn't sure.

Sometimes black holes will inject large amounts of energy into the surrounding region, Mutch explained. This keeps new gas from being accreted.

"However, we know from observations that the central black hole of our galaxy is not particularly active," Mutch said.

The new color "provides us with an interesting open question as to what exactly is causing the Milky Way and Andromeda to be running out of fuel for producing new stars."

Details of the study were published in the July edition of the Astrophysical Journal.