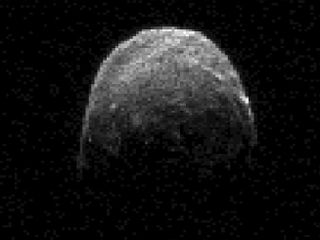 An asteroid the size of a city block zoomed inside the moon's orbit today (Nov. 8) in a rare flyby that marked the closest approach to Earth by such a big space rock in 35 years.

Scientists eagerly awaited the close encounter all the same, since it's providing an unprecedented opportunity to learn more about the asteroid and its orbit.

"We would really like to characterize it as much as possible, and learn about its past and about its future," said Marina Brozovic, a scientist with NASA's Near-Earth Object Office at the Jet Propulsion Laboratory (JPL) in Pasadena, Calif., before today's flyby. "I really can't wait to see the images."

Astronomers are taking advantage of the close encounter with 2005 YU55, which was discovered in 2005 by Robert McMillan of the University of Arizona's Lunar and Planetary Laboratory.

Scientists have trained a suite of instruments on the asteroid, including giant radio telescopes at the Arecibo observatory in Puerto Rico and NASA's Deep Space Network facility in Goldstone, Calif.

The aim is to get a better idea of 2005 YU55's size, surface features, rotational period and orbit, researchers said.

2005 YU55 makes one complete lap around the sun every 15 months. Astronomers have already determined that the asteroid poses no threat to Earth for at least the next century, but observations made during this close approach should help them predict its movements even further into the future.

"For many centuries, we'll know exactly where this object is going to be," Brozovic said.

NASA has already released a new image of 2005 YU55 taken by the big Goldstone antenna, with many more surely on the way. And several organizations, including the Clay Center Observatory in Massachusetts and the online telescope service Slooh, provided live webcasts of the space rock's close flyby.

Skywatchers under clear, dark skies still have a chance to spot 2005 YU55 before it disappears into deep space. The best time to look up is a few hours after closest approach, according to Sky & Telescope magazine.

You'll need a telescope to find the space rock, which is relatively small and dim. Any scope with an aperture greater than 6 inches should be able to spot 2005 YU55, experts say.

The tricky part will be knowing where to look, since 2005 YU55 will be moving across the sky at about 7 degrees per hour (your clenched fist held at arm's length measures about 10 degrees). You can look up the asteroid's coordinates at JPL's Solar System Dynamics website, which is found here: http://ssd.jpl.nasa.gov/.

Note: If you snap a photo of asteroid 2005 YU55 during its Nov. 8 flyby of Earth and would like to share it with SPACE.com for a possible story or photo gallery, send the image and your observing comments to SPACE.com senior writer Mike Wall at mwall@space.com.