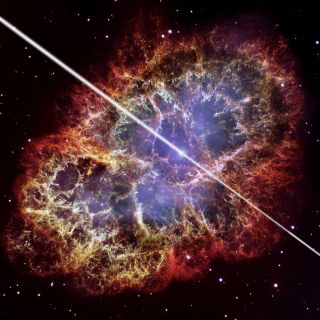 An artist's conception of the pulsar at the center of the Crab Nebula, with a Hubble Space Telescope photo of the nebula in the background. Researchers using the VERITAS telescope array have discovered pulses of high-energy gamma rays coming from this object.
(Image: © David A. Aguilar / NASA / ESA)

The space agency will hold a press conference at 2 p.m. EDT (1800 GMT) on Thursday to discuss the new findings, which were made with the help of NASA's Fermi Gamma-ray Space Telescope, officials said in a media advisory.

Pulsars form when massive stars die in supernova explosions and their remnants collapse into compact objects made only of particles called neutrons. When a mass weighing as much as the sun is packed into a tiny space the size of a city, the conserved angular momentum causes the resulting neutron star to spin very rapidly, and to emit a ray of high-energy light that sweeps around like a lighthouse beam.

Astronomers can detect this light, making a pulsar the closest thing to a black hole that scientists can observe directly, officials said. Some pulsars spin at tens of thousands of revolutions per minute, faster than the blades of a kitchen blender.

Participants in Thursday's press conference are: