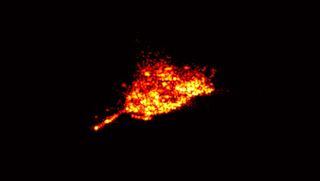 A few days before re-entering Earth's atmosphere, the German X-ray research satellite ROSAT was targeted by the Tracking and Imaging RAdar (TIRA) at the Fraunhofer Institute for High Frequency Physics and Radar Techniques in Wachtberg, near Bonn. TIRA is part of a global network of monitoring stations that collected data about ROSAT. From this data, the orbit was determined and images were produced. This example, acquired on October 20, 2011, clearly shows the antenna mast of the satellite.
(Image: © Fraunhofer FHR)

An old German satellite most likely met a watery grave during its weekend plunge to Earth, a fall from space that ended over the Bay of Bengal in the northeast Indian Ocean, German space agency officials say.

It is not currently known whether any fragments of the 2.7-ton satellite reached Earth's surface after its fiery trip through the atmosphere, officials at the German Aerospace Center (DLR) said. The debris was expected to fall over a 50-mile (80-kilometer) track of the Earth's surface.

"With the re-entry of ROSAT, one of the most successful German scientific space missions has been brought to its ultimate conclusion," Johann-Dietrich Wörner, chairman of the German Aerospace Center's Executive Board, said in a statement. "The dedication of all those involved at DLR and our national and international partners was exemplary; they are all deserving of my sincere thank you."

ROSAT launched in June 1990 to conduct an all-sky survey with its X-ray telescope. In 1998, its onboard star tracker failed and the satellite suffered permanent damage when its X-ray sensors pointed directly at the sun. The spacecraft was officially shut down in February 1999. [Photos of the doomed ROSAT Satellite]

According to DLR officials, the precise time and location of ROSAT's re-entry was calculated using data of the satellite's orbital path and other tracking information provided by international partners, including the U.S.

While the satellite likely broke apart as it re-entered Earth's atmosphere, German aerospace officials previously estimated that up to 30 big pieces, weighing a total of nearly 1.9 tons (1.7 metric tons), could survive the fiery trip and reach the surface of the planet. These fragments were expected to consist mostly of the spacecraft's heat resistant mirrors and other ceramic pieces.

ROSAT's fall came about a month after a defunct NASA climate satellite also tumbled to Earth at the end of its life. NASA's Upper Atmosphere Research Satellite, or UARS, re-entered the atmosphere on Sept. 24 and plunged into the Pacific Ocean, well away from the North American coastline.

The 6.5-ton UARS spacecraft was the largest NASA satellite to fall uncontrolled from orbit since 1979.