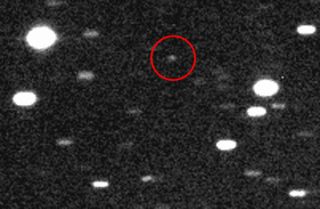 Observations coordinated by ESA's Space Situational Awareness programme have led to the discovery of a previously unknown near-Earth object, asteroid 2011 SF108 in September 2011. The asteroid orbits the sun in a path that brings it within about 18 million miles (30 million km) of Earth.
(Image: © ESA/TOTAS Survey Team)

A team of amateur astronomers has discovered a previously unknown asteroid in orbit that brings it near the Earth, highlighting the contributions regular folks can make to planetary defense, scientists announced Wednesday (Oct. 12).

The skywatchers spotted the asteroid, which is known as 2011 SF108, in September using a telescope in the Canary Islands. While 2011 SF108's orbit appears to bring it no closer to Earth than about 18 million miles (30 million kilometers), it still qualifies as a near-Earth object — the class of space rocks that could pose a danger to our planet.

The team took advantage of an observation slot sponsored by the European Space Agency's Space Situational Awareness (SSA) program to make the find, according to an ESA announcement.

"As volunteer work, it is very rewarding," said Detlef Koschny, head of near-Earth object activity for SSA, in a statement. "When you do spot something, you contribute to Europe's efforts in defending against asteroid hazards." [Photo of newfound asteroid 2011 SF108]

Asteroid 2011 SF108 was discovered by the Teide Observatory Tenerife Asteroid Survey (TOTAS) team, a group of 20 skywatching volunteers. They used the 1-meter telescope at the European Space Agency's Optical Ground Station on Tenerife in the Canary Islands.

Specifics on the asteroid's estimated size were not detailed in the ESA announcement.

Busch's software flags potential space rocks, but the finds must be confirmed by human eyes. The software scored a hit during the observing session of Sept. 28 and 29, researchers said.

"Images are distributed to the entire team for review, and any one of them could be the discoverer of a new asteroid," Koschny said. "This time, the luck of the draw fell to Rainer Kracht."

To date, about 8,000 near-Earth objects have been discovered worldwide, but many thousands more are suspected to exist. Astronomers are keen to find as many of them as possible, so they can better assess the chance that a big, dangerous space rock will slam into Earth sometime soon.

Since starting their SSA-sponsored survey work in January 2010, the TOTAS amateur astronomers have identified nearly 400 candidate asteroids, 20 of which have been confirmed and named, researchers said.

After examing telescope images from three separate nights, the TOTAS team was able to determine 2011 SF108's orbit well enough to declare it a near-Earth object.

The team sent news of its find to the Minor Planet Center in Cambridge, Mass., the worldwide clearinghouse of information about comets and asteroids.

While 2011 SF108 appears not to pose much risk to Earth for the foreseeable future, further observations could help refine its orbit and our assessment of just how dangerous it might be, researchers said. But for now, the team can bask in the glow of discovery for a spell.

"It was really an exciting moment when I saw 'our' asteroid appearing on my computer screen," Koschny said. "It confirms the excellent quality of work done by the entire TOTAS team."