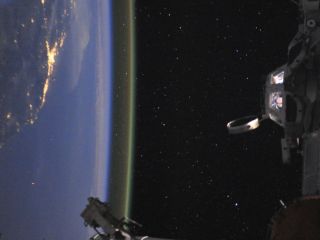 The scene could be straight out of a science fiction film: A solitary astronaut gazes longingly at his home planet below from a spaceship observation deck — a tiny bubble of light in the vast ocean of space. But this isn't a sci-fi scene at all; it's a real-life photo from a NASA astronaut.

In the photo, American astronaut Ron Garan is looking down at Earth from the International Space Station. The photo was taken by a crewmate from a different part of the space station and shows Garan awash in bright light as he snaps his own photos from the orbiting lab's seven-window observation room, called the Cupola. Bright stars shine in the background, with Earth's atmosphere aglow and city lights visible on the Earth.

"How I spent my last day in space," Garan wrote in a Twitter post recently when he uploaded the image. "That's me in the cupola off the coast of Australia taking my last of >25K pics." [Amazing Space Photos by Astronaut Ron Garan]

Garan, who spent more than five months living and working on the space station, was a prolific space photographer and posted many stunning views of space, Earth and auroras during his stay.

Garan returned to Earth on Sept. 16 aboard a Russian Soyuz capsule, but during his spaceflight (as well as before and after it) he chronicled his work on Twitter under the moniker @Astro_Ron, He also runs a separate website called Fragile Oasis, which is dedicated to raising awareness about Earth and its environment.

Garan spent 164 days in space as part of the space station's Expedition 27 and Expedition 28 crews. He launched into orbit aboard a Russian Soyuz capsule on April 4.

Like all astronauts, Garan has said the views of Earth from space are awe-inspiring.

" I think it's very difficult not to be moved when you look at our planet from space. You see how beautiful it is, how fragile it is. You really get this feeling of, we've been given an incredible gift," Garan told SPACE.com after returning to Earth. "We are very, very fortunate."

Garan said that, when gazing at Earth from the vantage point of space there's a whole new sense of perspective.

"When you see the vastness of space, just utter blackness, and then this absolutely glowing beautiful spacecraft that we're all riding on, a spacecraft we call Earth," he added. "I think we would have a lot less problems, some of the challenges we face would be more easily solved, if everybody had that perspective."

You can download a wallpaper-size version of the stunning photo of Garan in space here.